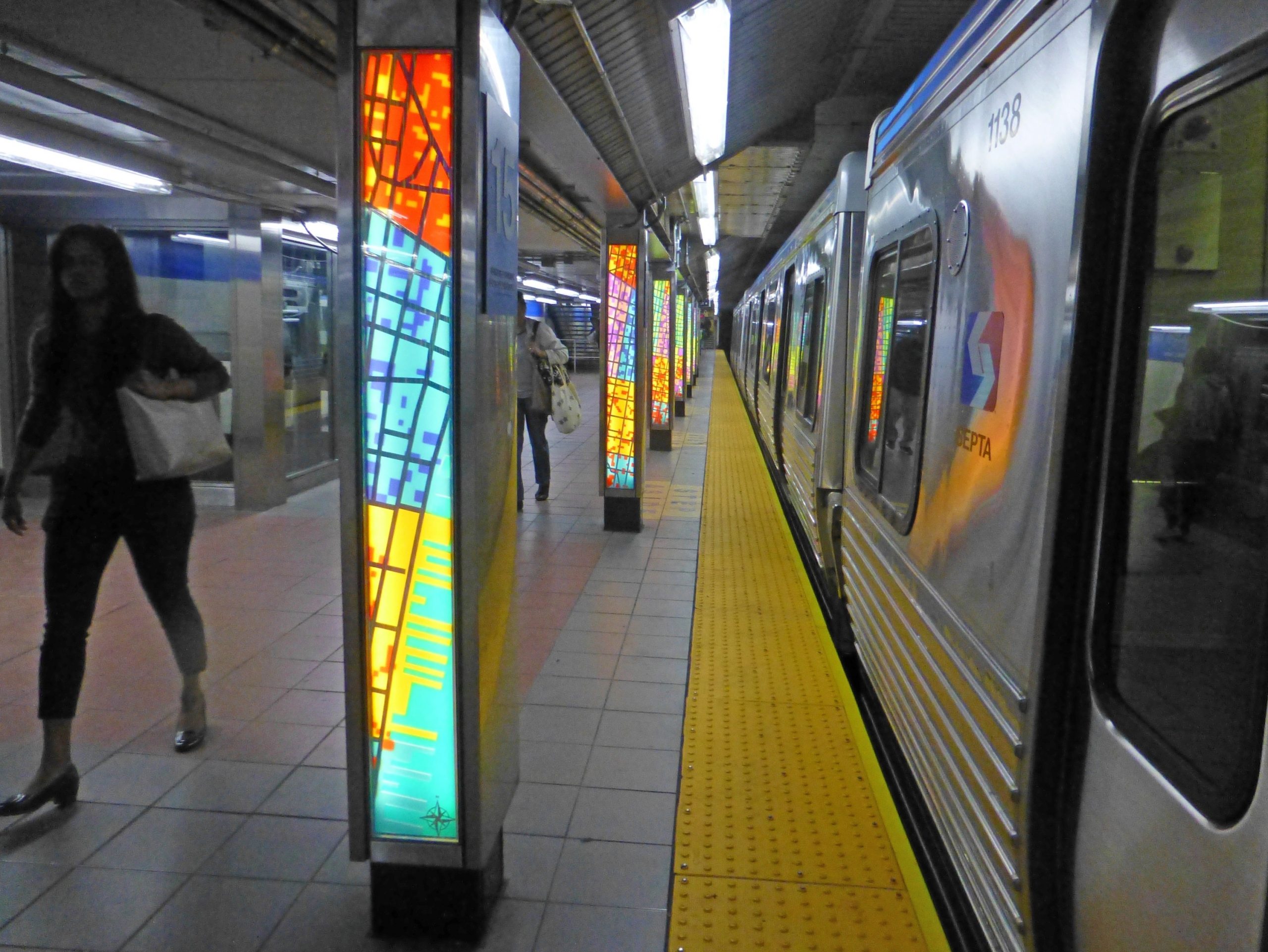 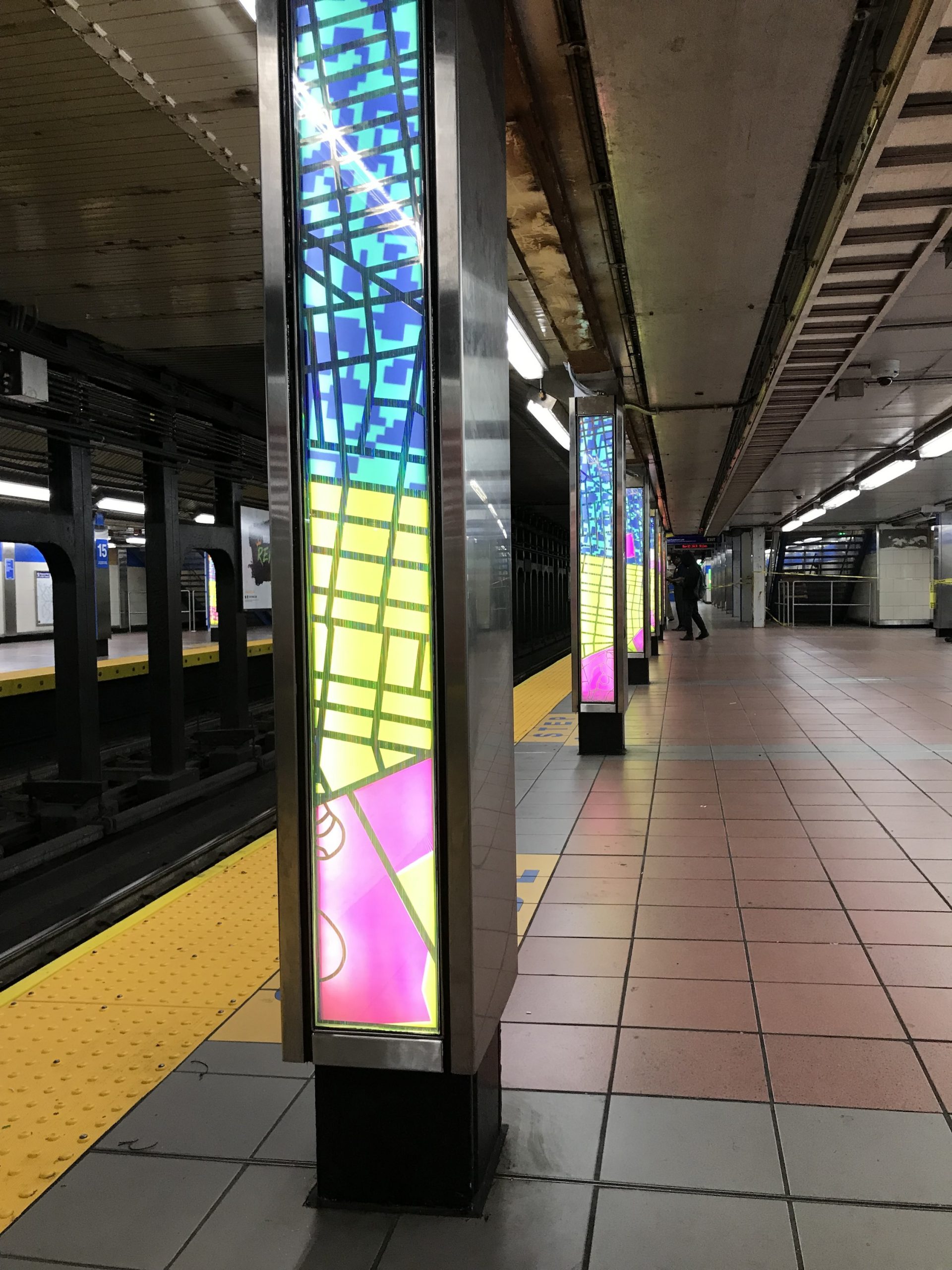 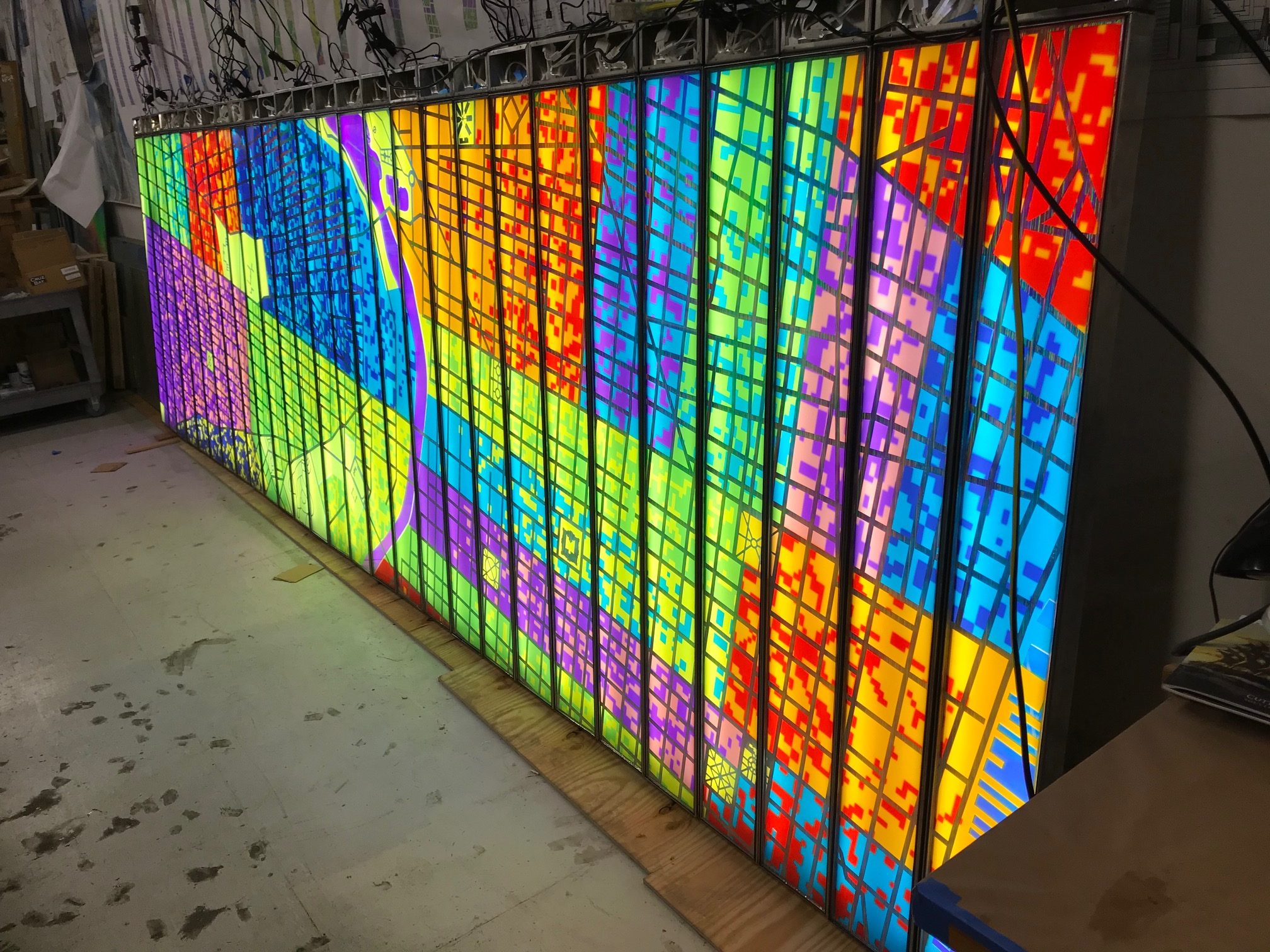 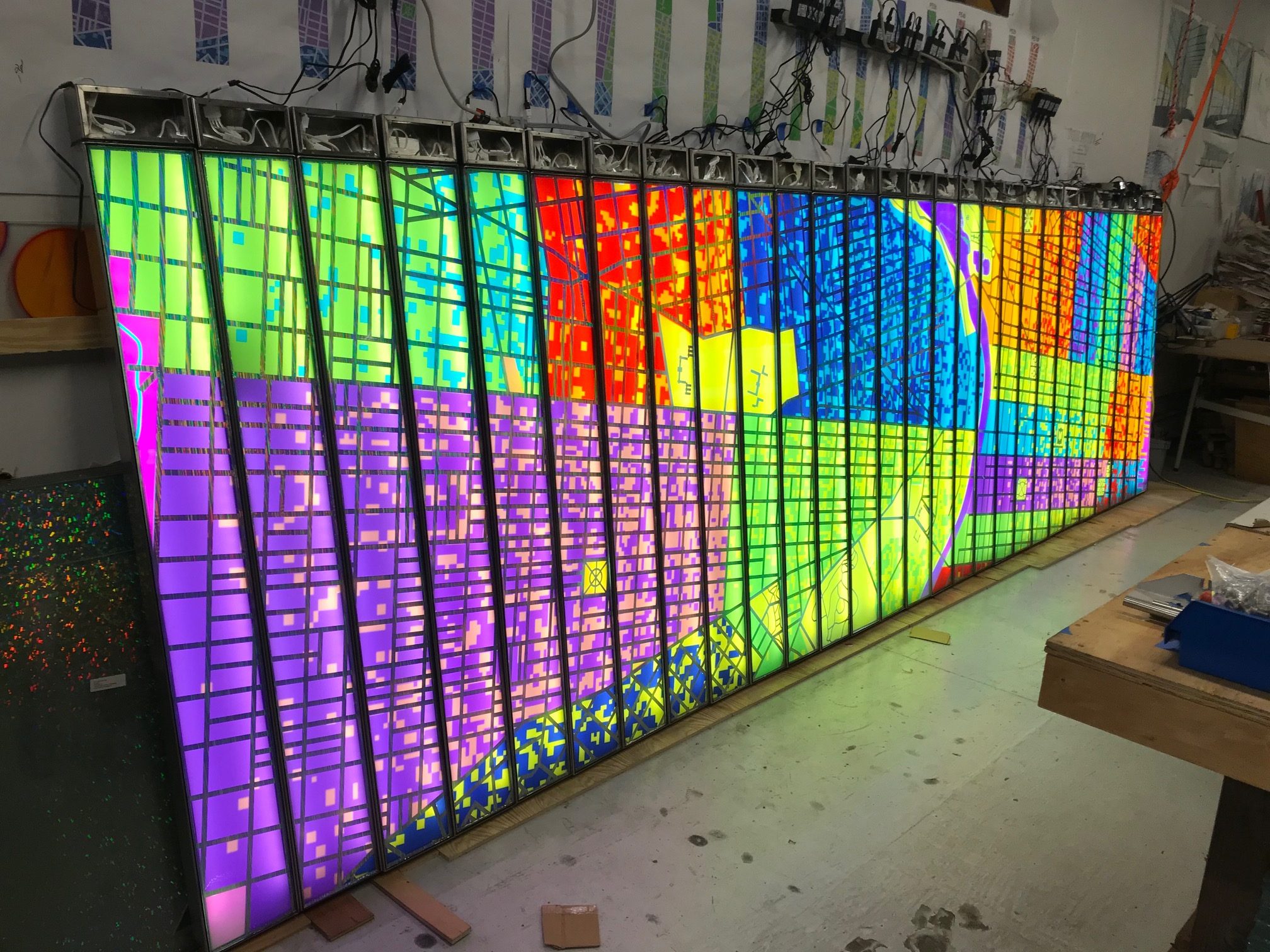 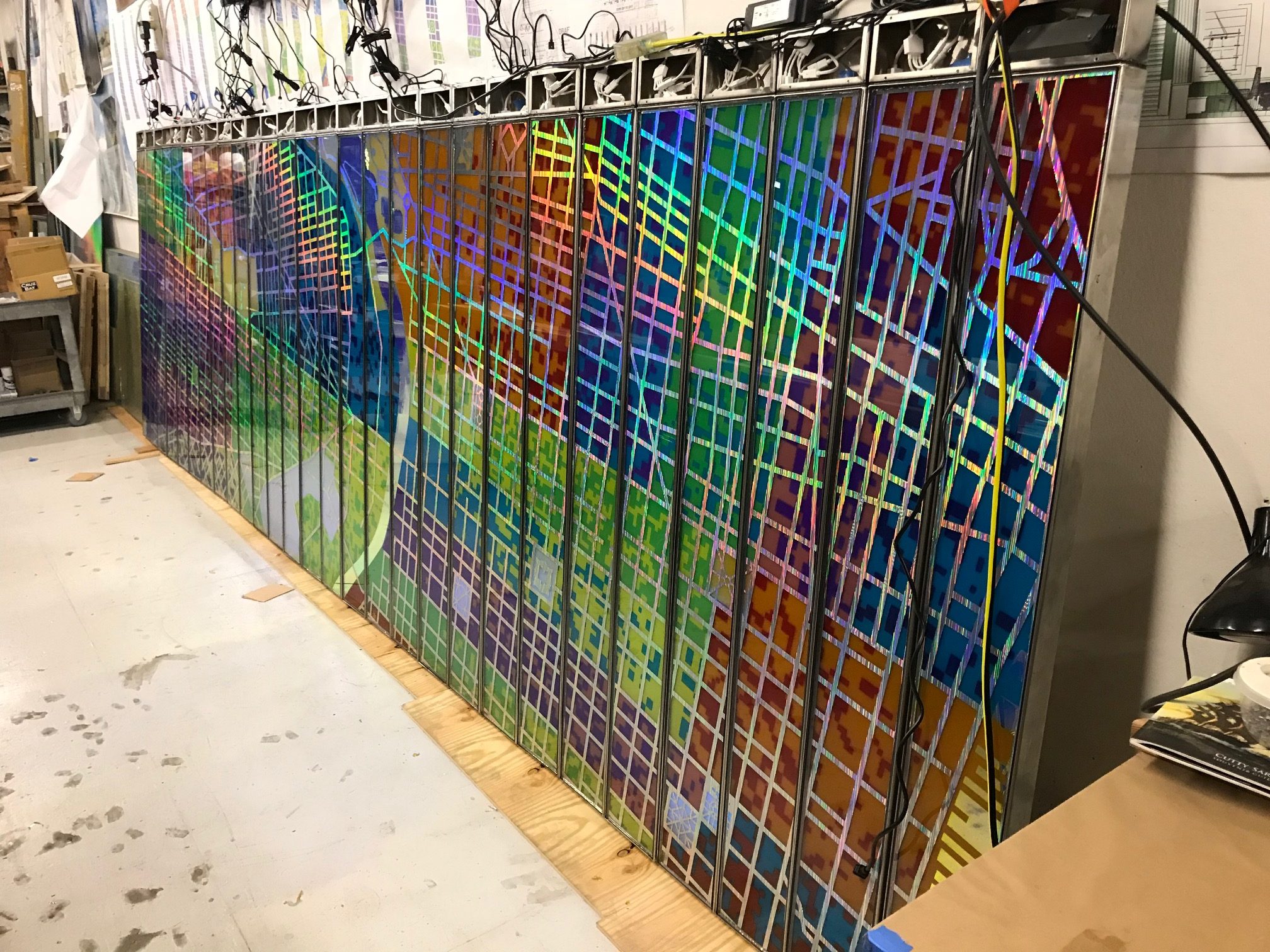 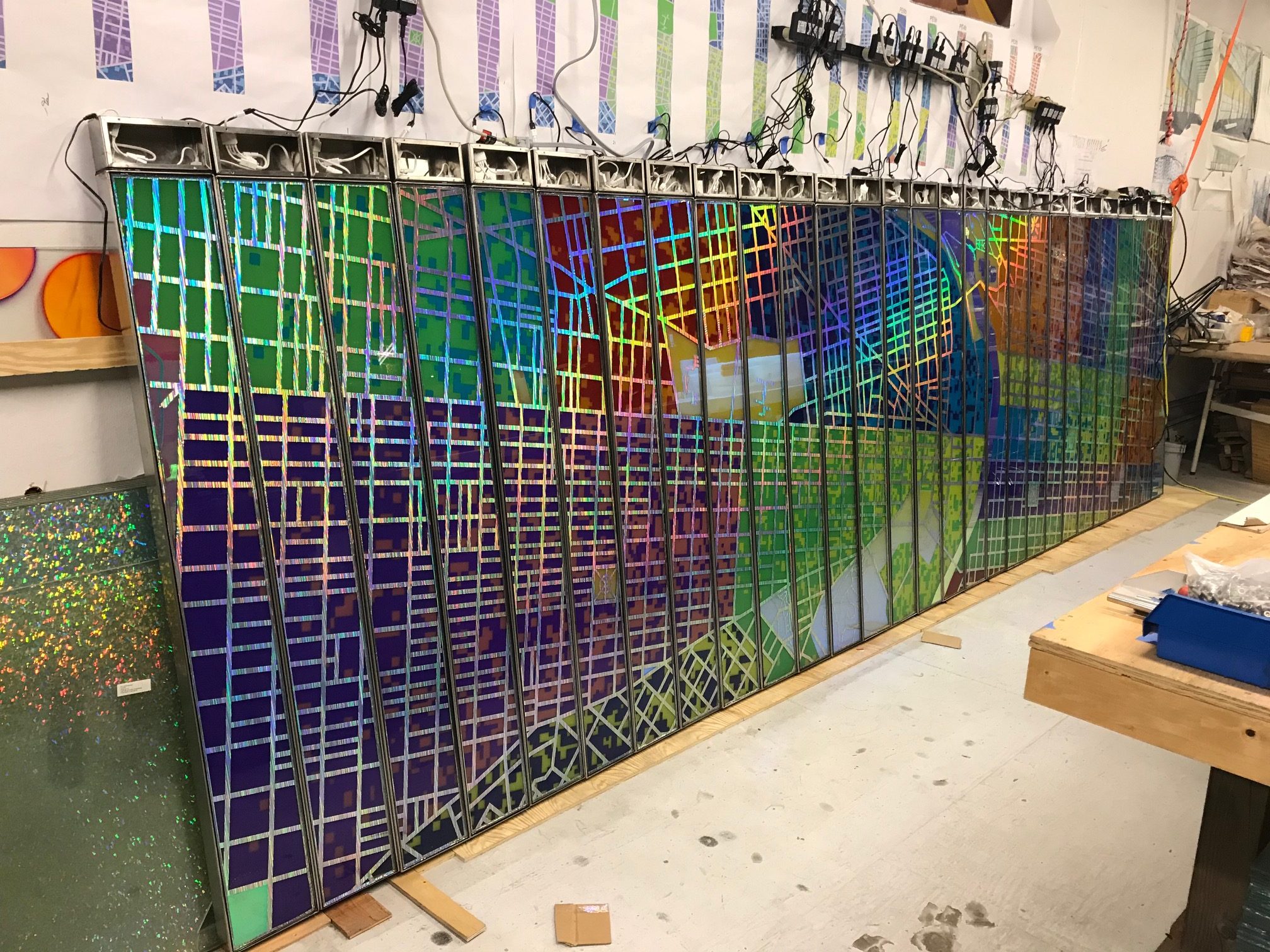 PhiLux adds color and luminosity to Philadelphia’s subways. The commuter experience at SouthEastern Pennsylvania Transportation Authority’s City Hall subway Station is more vibrant with the installation of PhiLux : Love of Light — 28 illuminated, laminated chromatic glass and stainless steel reflector panels that clad the station’s central columns – two panels per column, 14 columns total, seven columns on each side of the platform. Each box contains a triple-laminated glass panel that shows a portion (or sliver) of a map of Philadelphia with streets and grids shown in a variety of color and holographic laminate films. The glass panels are laminated with colored and holographic film, and illuminated from behind with LED strip lighting. The glass and stainless steel panels are constructed as sealed units that fit into SEPTA’s stainless steel column surrounds. Each panel consists of one layer of 3/8” thick glass, and two layers of 3/16” glass sheets, laminated with EVA interlayer; total ¾” thick – the outer glass panel is tempered for extra-strength, and coated with a protective scratch-resistant layer of 3M anti-scratch Mylar film.

In designing PhiLux, Ray King was inspired by geometric elegance of the City of Philadelphia’s physical layout. Envisioned by William Penn as a Greene Country Towne, he took historic maps of Philadelphia and abstracted the geometry; identified the wards by color and then saturated and graduated the colors within each section. The large map was then sliced into 7 vertical strips, to distribute the imagery to the 7 columns. While walking the platform, the patterns and colors of two of the columns will align at one time and this will continue for a participatory experience. King chose a map dating to 1910 as the primary source -- it shows the city’s development into an industrial center. Additionally, the map is broken up to relate to the path of the train and the station platform. The columns on the Westbound side of the station shows the maps of the city’s western sections, while columns on the Eastbound side show maps of the eastern sections.

After being selected for this commission through a national competition and selection committee, administrated by Independent curator/ SEPTA Arts Consultant Marsha Moss, Ms Moss shepherded this project through the various layers of SEPTA and the City of Philadelphia Arts Commission’s bureaucracies. King worked with City agencies to refine his design. He chose a map dating to 1910 as the primary source. The date is significant because it shows the cities growth and development into an industrial center. The imagery on the columns follows the subway route and the expansion of the city. Additionally, the maps is relate to the paths of the trains and the platforms. The columns on the Westbound side of the station show the maps of the city’s western sections, while the columns on the Eastbound side show maps of the eastern sections.Green spaces, rivers and significant structures are distinguished as special features in the grid with dichroic and holographic lamination. The chromatic elements change colors as the viewers pass by the columns, adding more visual mystery and intrigue as riders board the train. The juxtaposition of historic data with futuristic materials captures the spirit of Philadelphia as a city deeply rooted in history and innovation.