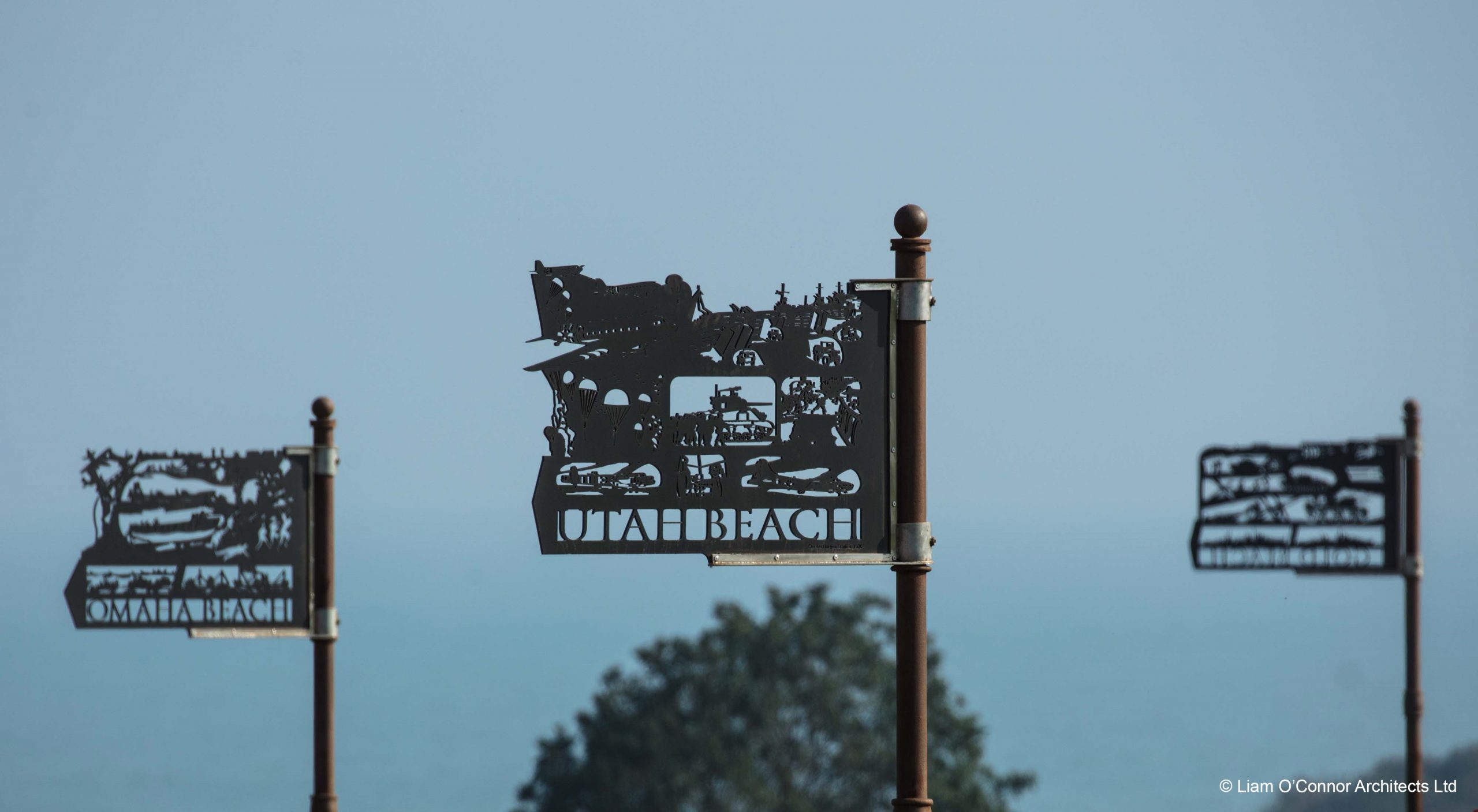 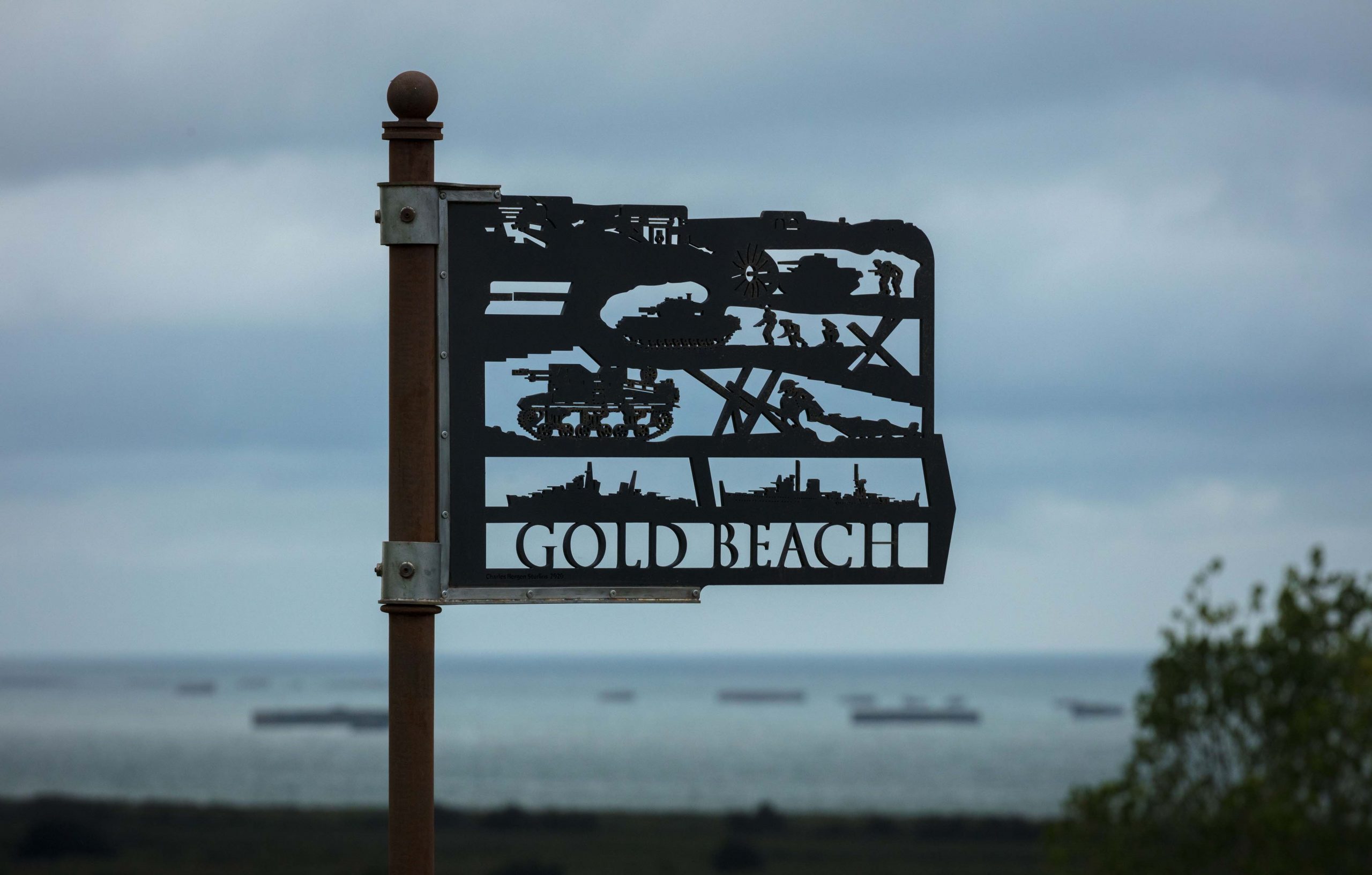 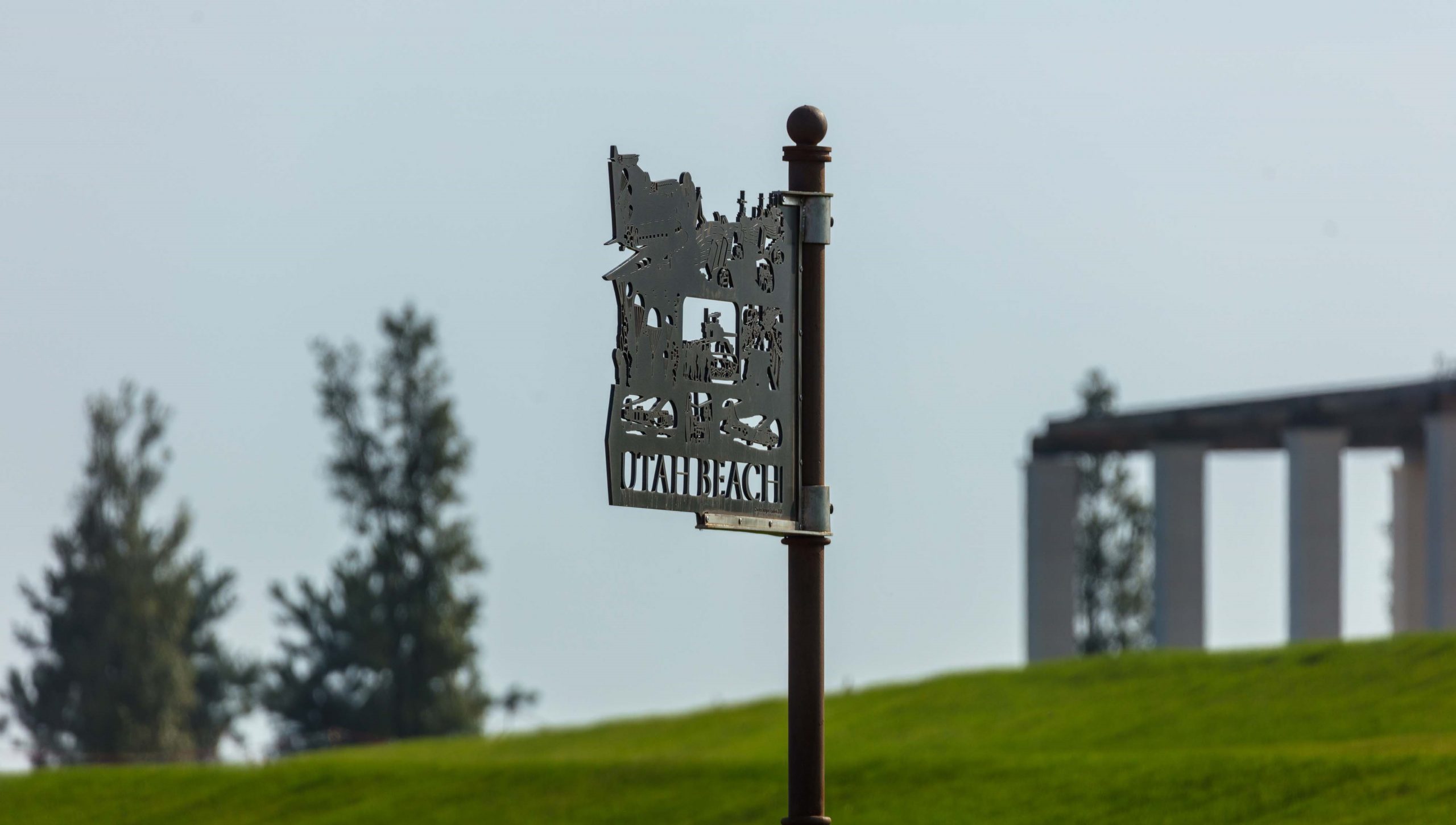 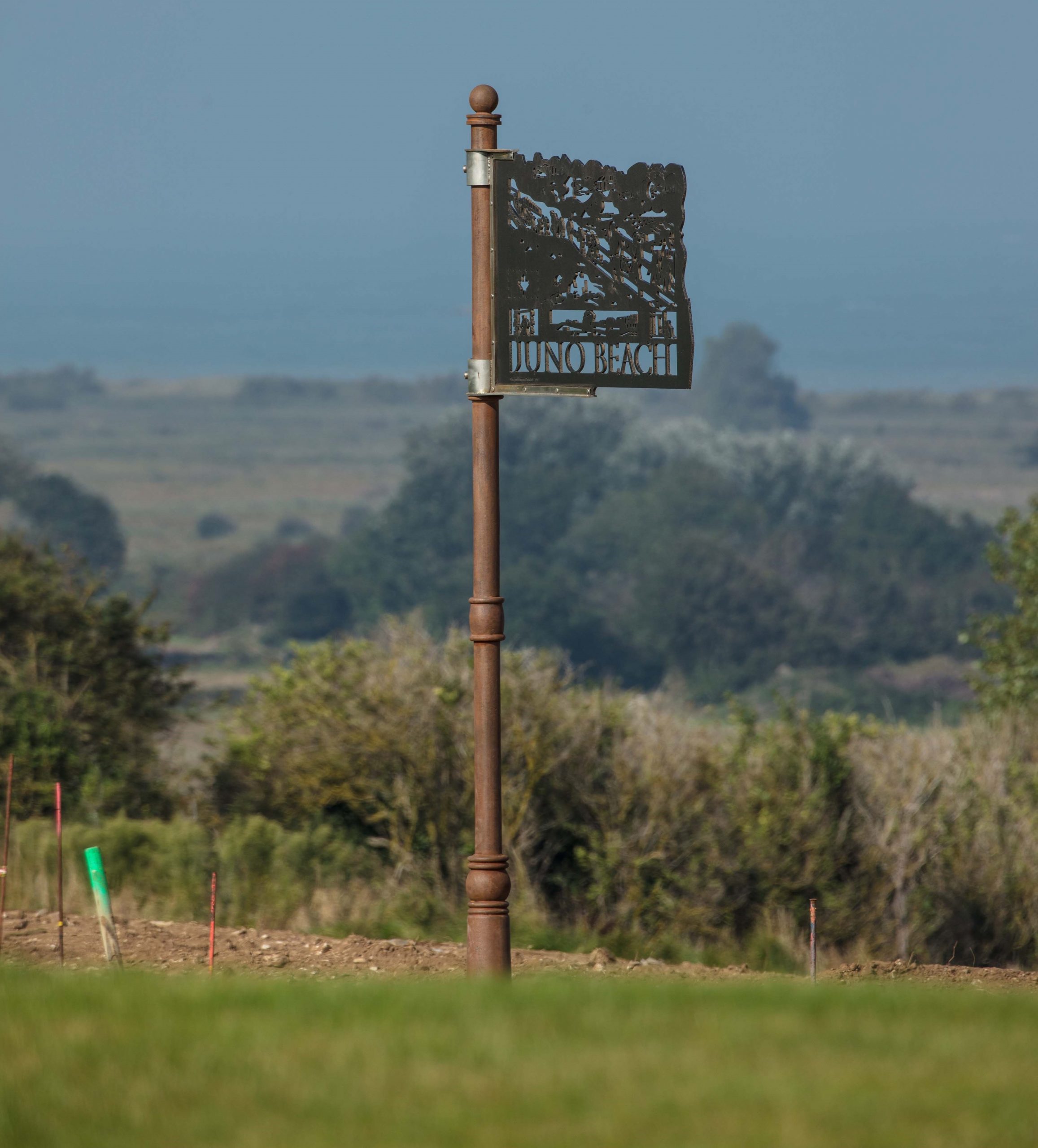 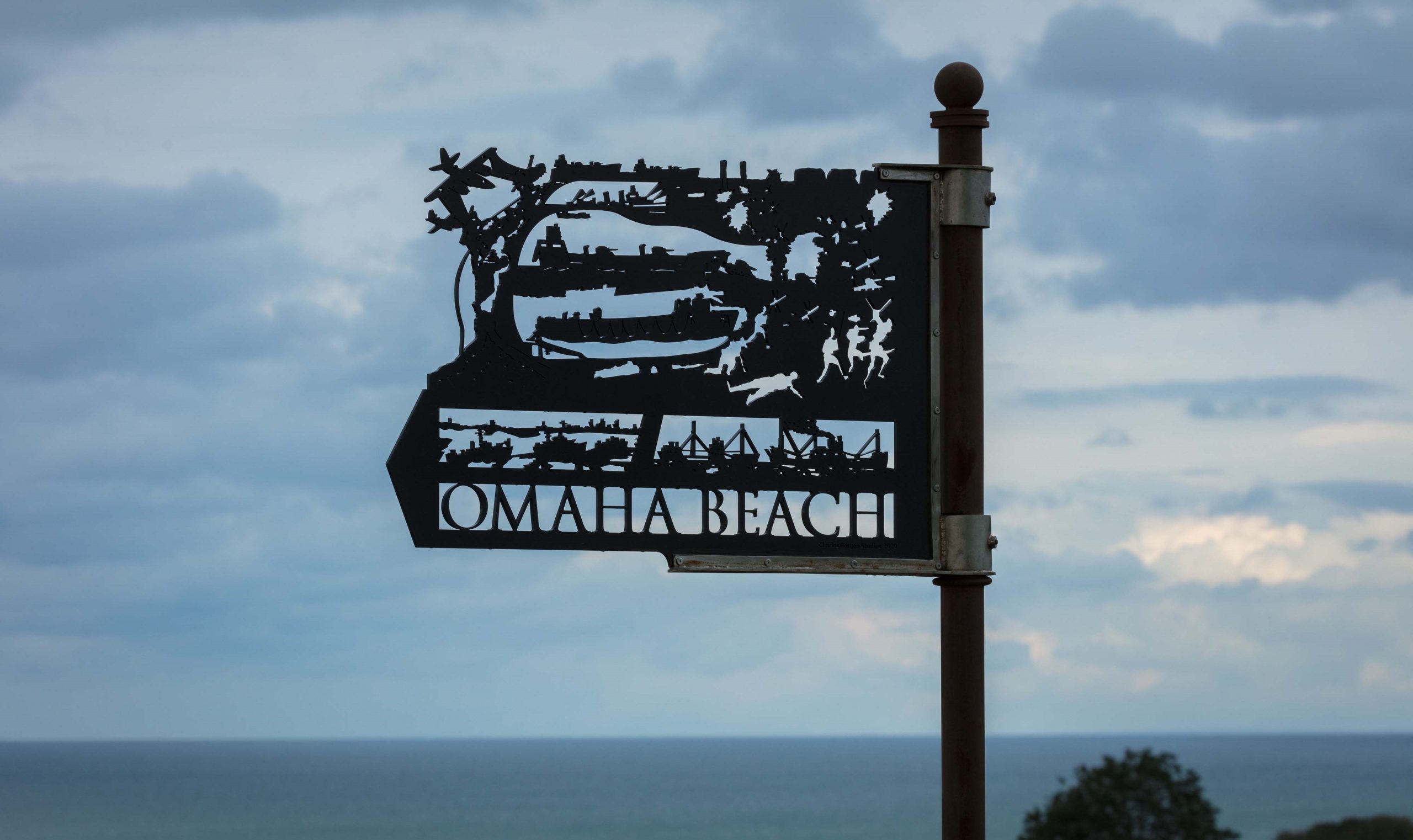 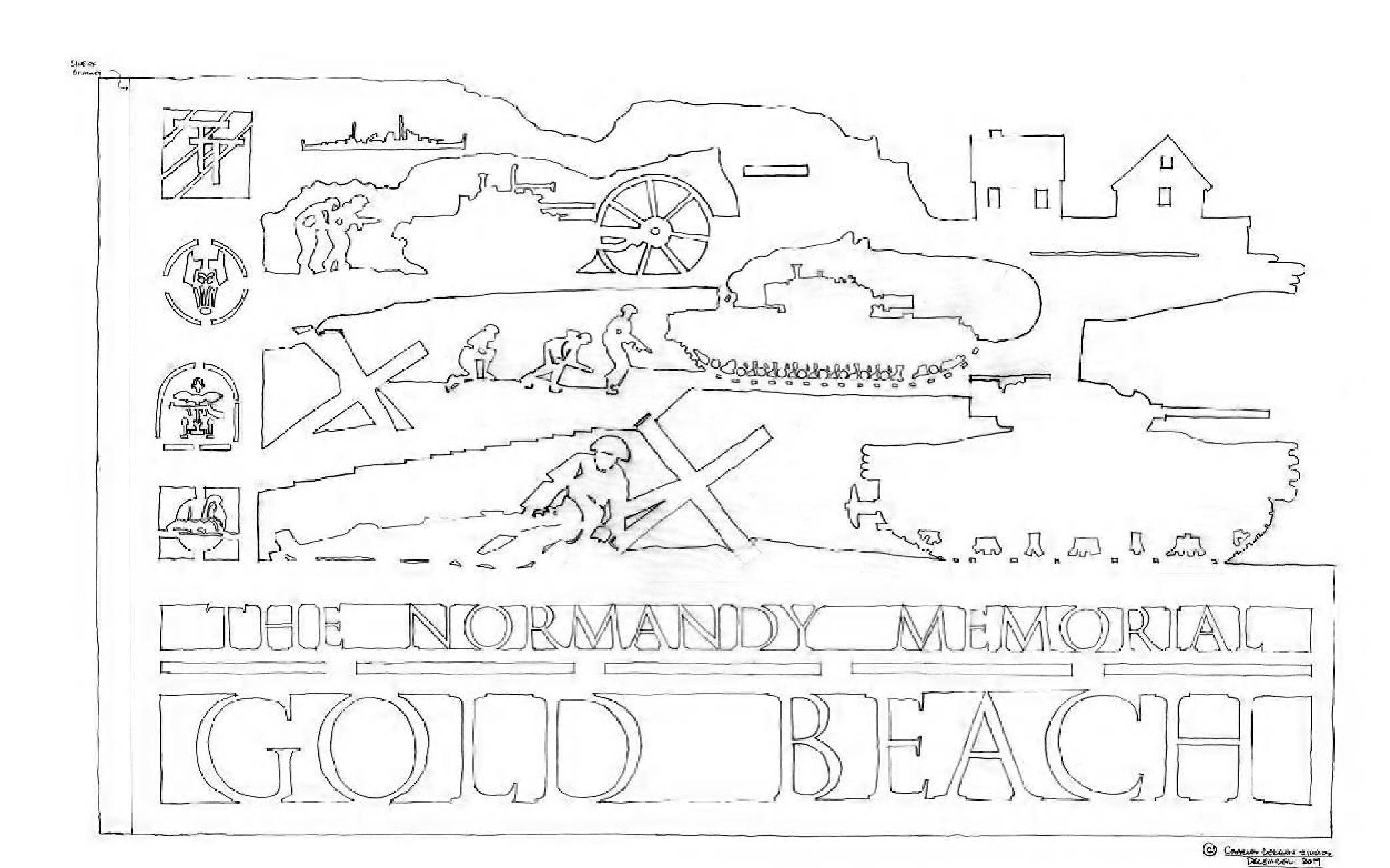 The Memorial records the names of the approximately 21,000 British personnel who lost their lives in the landings and the campaign which followed.

Charles Bergen Studios designed five-flag sized waterjet cut waymarking signs that direct visitors to the five invasion beaches—Utah, Omaha, Gold, Juno, and Sword Beach. The sculptural works are part artifact, part signage, and part art. With a bronze TNEMEC coating to match the three figurative sculptures at the Memorial itself these signs both direct visitors to the five invasion beaches as well as tell the story of what happened on each beach on D-Day. The posts are iron and the brackets are stainless steel.

The goal was to create waymarkers that were also artworks and history telling elements in themselves. This goal was extremely important due to the high profile of this project, it's location and it's proximity to the other landing beaches and memorials by the Canadians and the Americans.

After talking at length with the Architect about this project over a period of two years I initially started by doing some research as to what happened at the five DDAY Invasion Beaches on DDAY. I then chose Gold Beach--one of the English assault beaches to create a sketch for and to write a narrative describing what happened that day. I discussed the project and the initial sketch with the Architect and the Board. The Board was represented by the Director of the Southhampton DDAY Museum. Once I received the commission I wrote narratives for each of the five beaches which we discussed and edited until they were happy with the content to be portrayed. I then revised the first sketch and created four other sketches. Once all five sketches were created there was a back and forth process until they liked the designs. I then created the CADD files for waterjet cutting and had the brackets designed.

A very challenging but rewarding project. Charles Bergen Studios worked with Aaron Rogers, Mara Cherkasky, Girish Kulkarni, and Hakeem Olayinka to create the artwork. Research was done at the US National Archives, The Canadian War Museum, The New Orleans DDAY Museum and the Southhampton DDAY Museum.