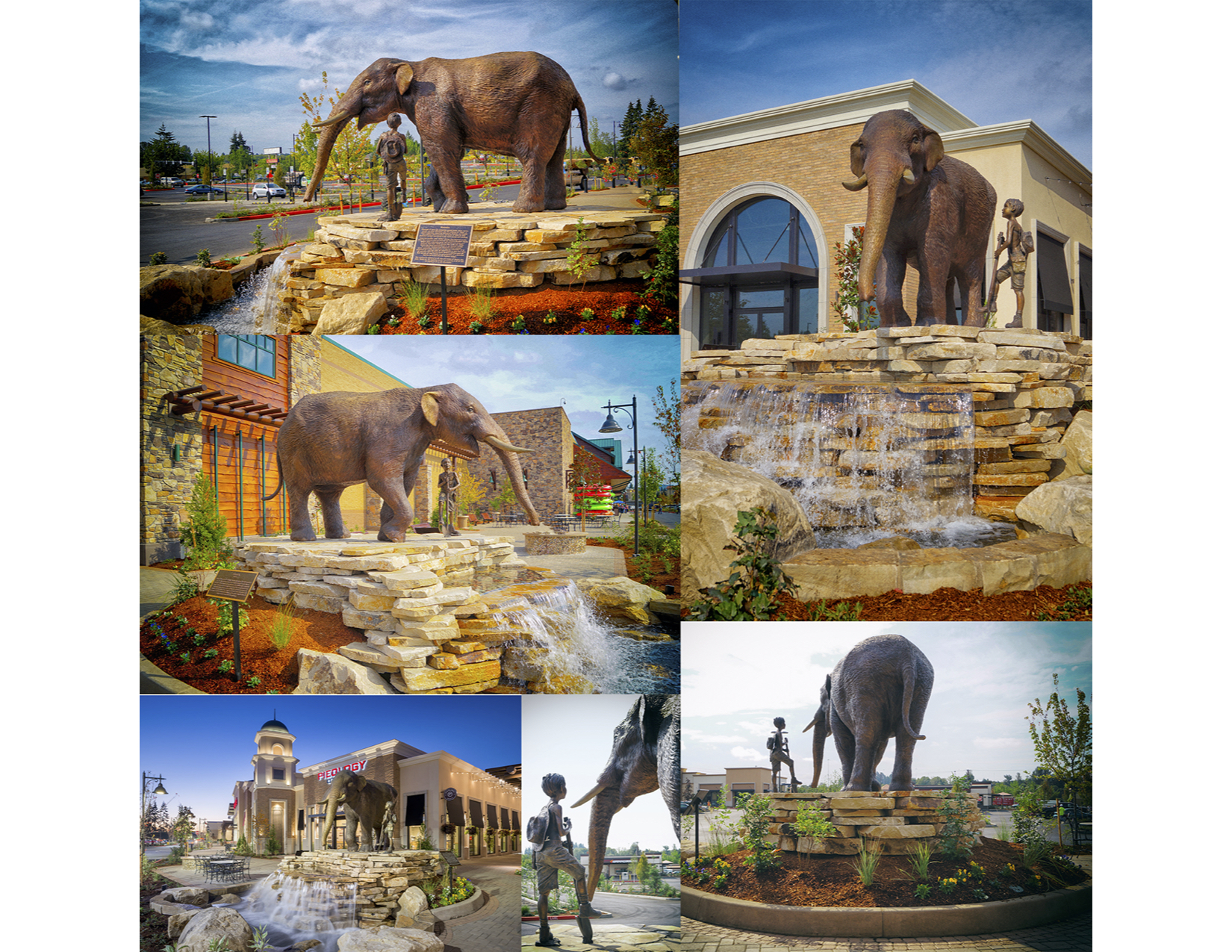 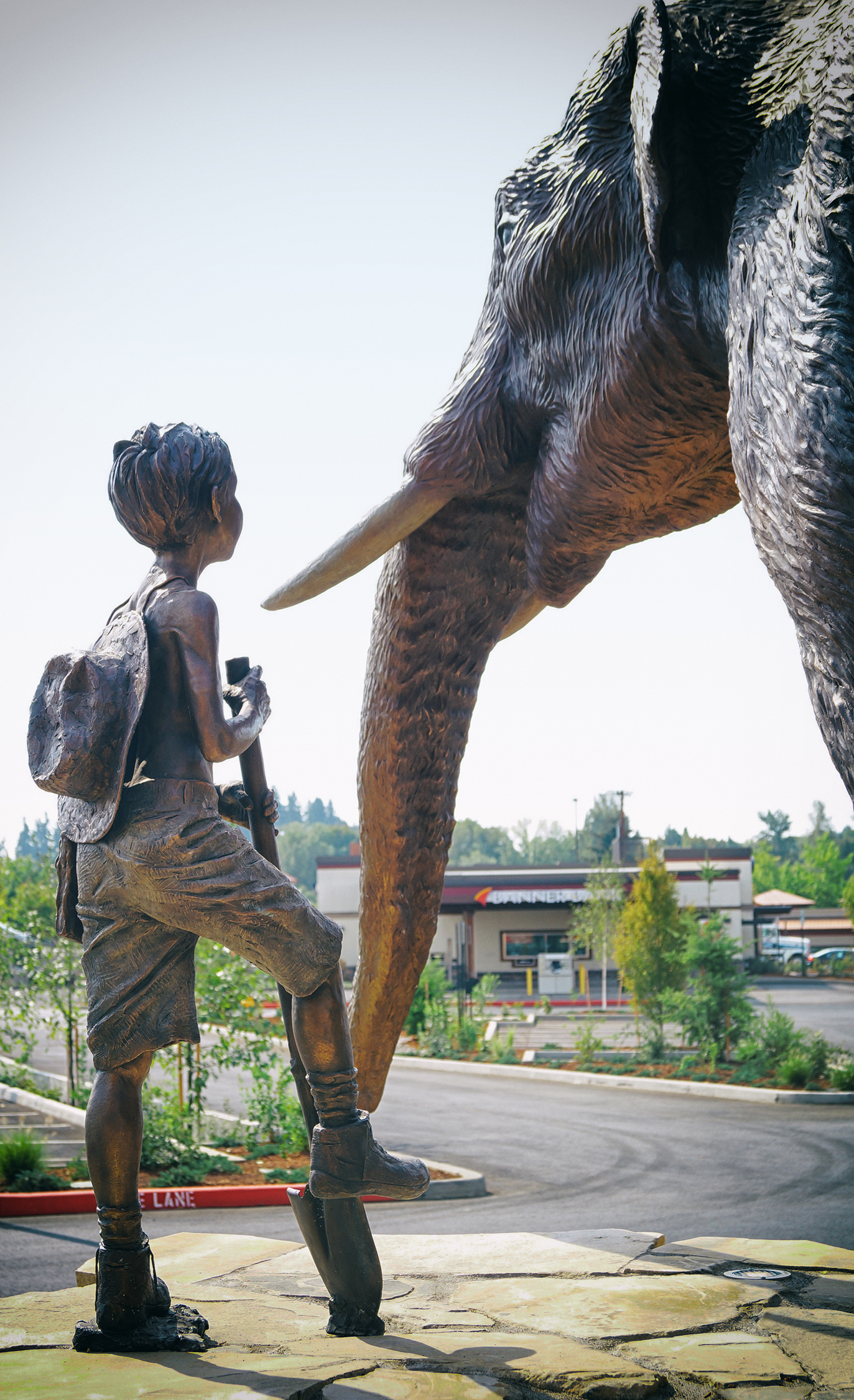 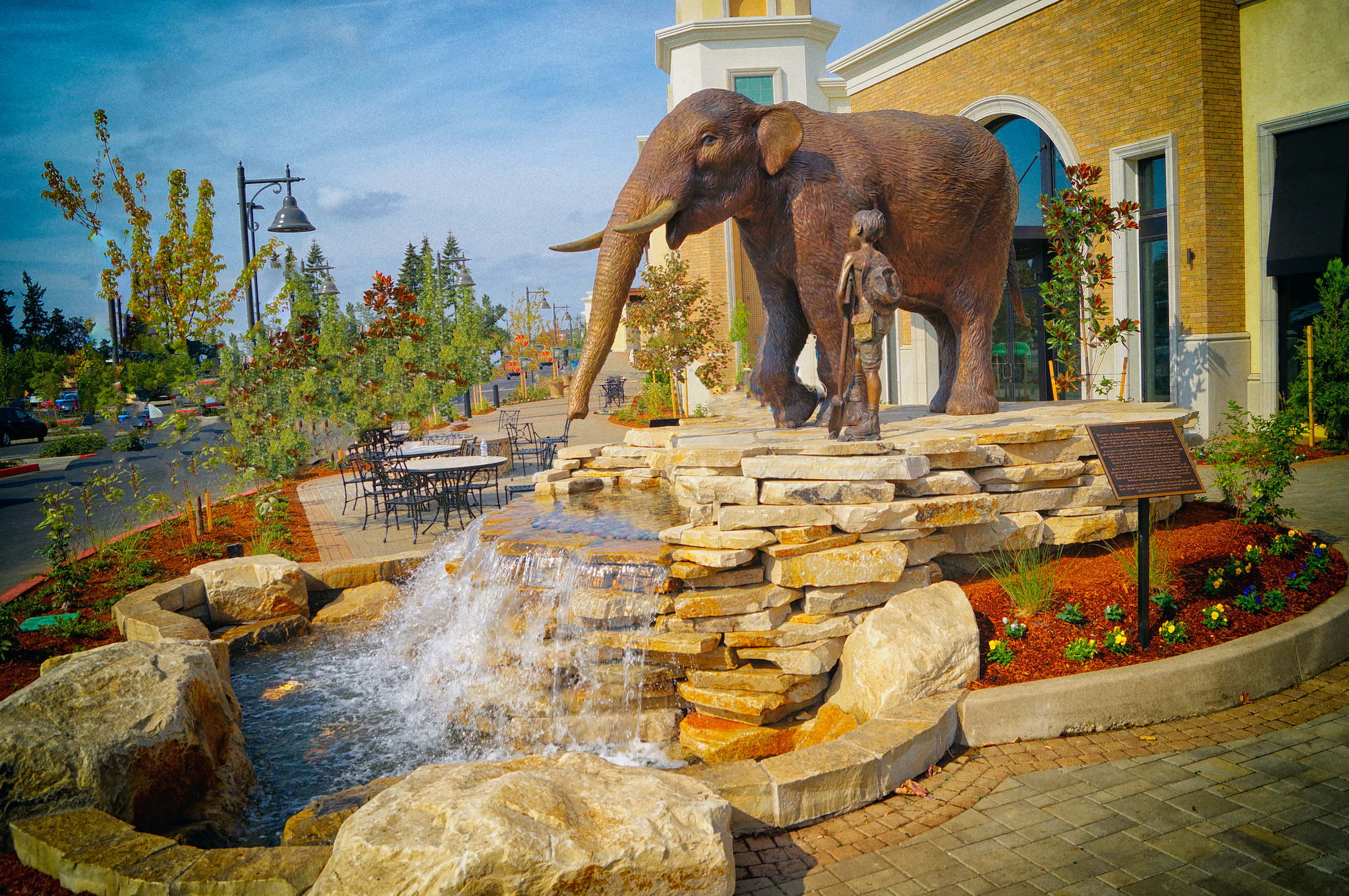 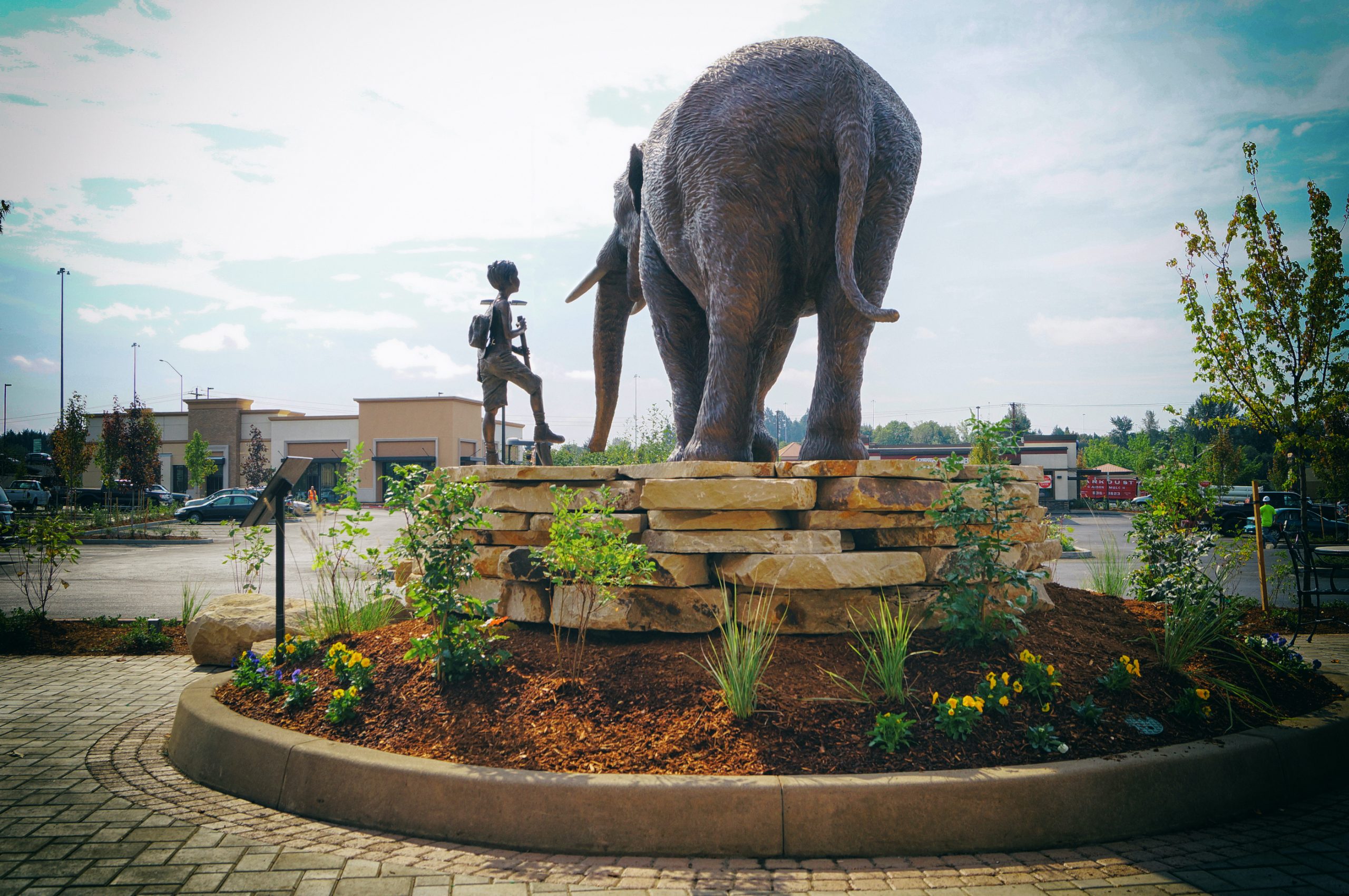 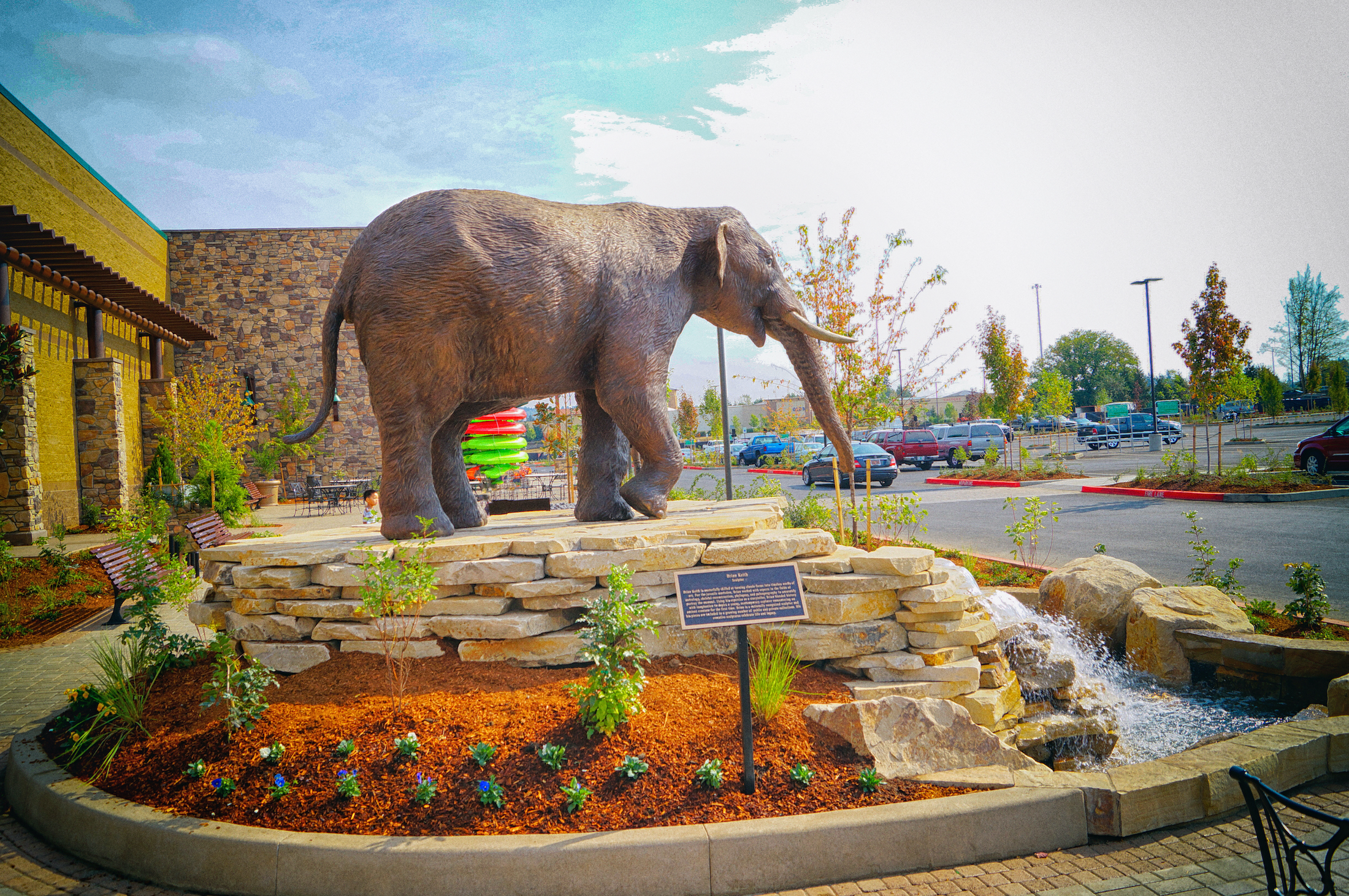 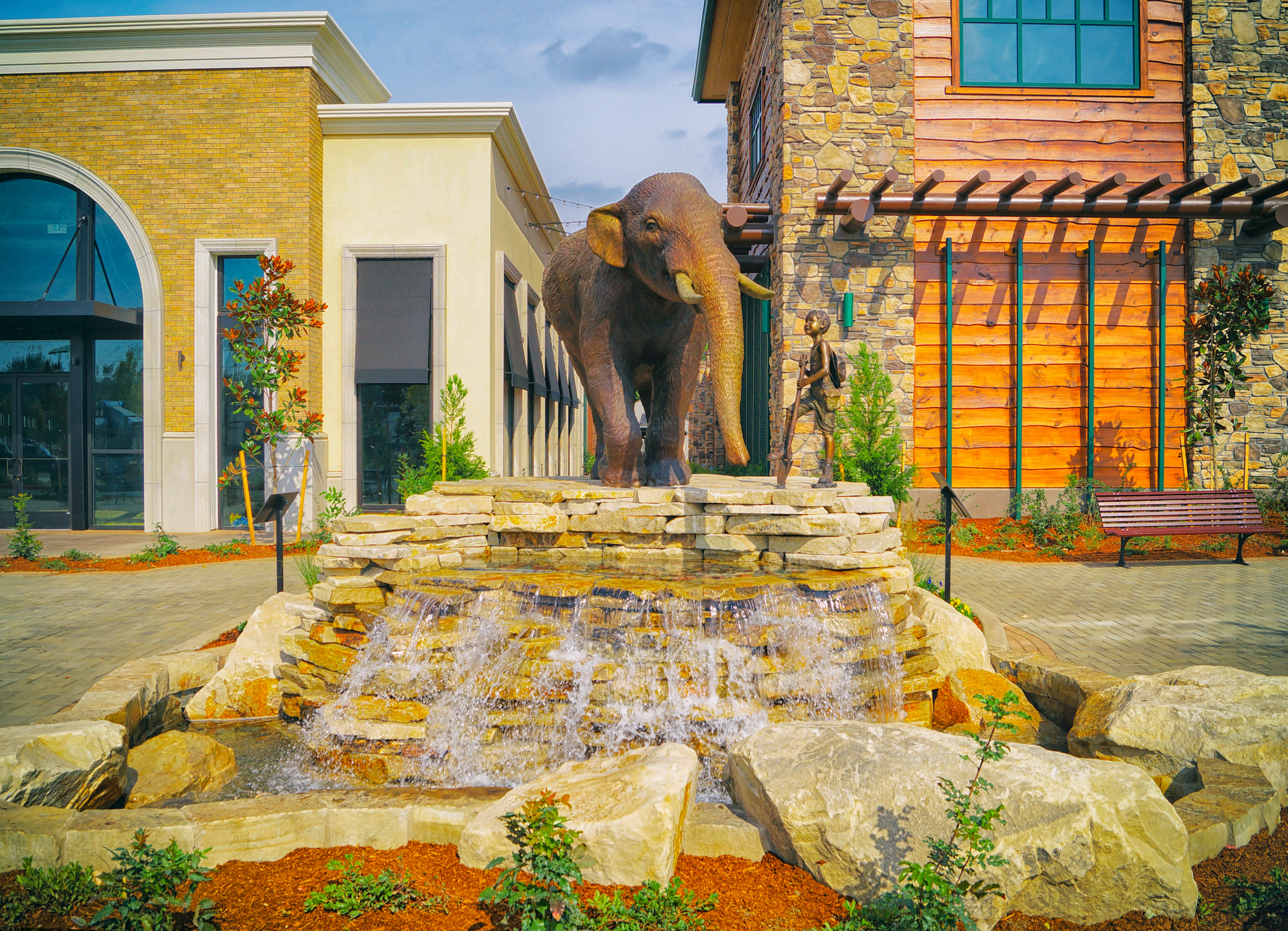 This is a life-size juvenile mastodon, just like the one that would have existed within the area of Tualatin, OR where the bones were found. It is made of bronze and has gentle pose as it displays the look as if going for a drink of water. Standing next to the mastodon is the figure in bronze of a young, shovel-wielding explorer. This boy captures that same nature/spirit of adventure and imagination that made it possible to find and unearth the mastodon bones in the Tualatin Valley.

I was commissioned by developer CenterCal Properties to create a life-like depiction of the prehistoric beast that has become something of an emblem in the city after bones of one were unearthed in 1962. We opted for a younger take on the early elephant relative so as not to scare children.

To make the mastodon more accessible, and to endear him to younger shoppers, the bronze display includes contemplative, but awestruck, human boy — the idea being that the child is wondering what it would be like to live in prehistory, Keith explained.

The story of a young boy named John George, or “Bobby” as they called him, who noticed a mastodon (tooth)molar that was being used as a door stop which INSPIRED him to later dig up bones of a Mastodon in Tualatin for a geology class at Portland State University in the 1960's. It began as a lump of unformed clay, and slowly over the course of about 6 months, the mastodon emerged. There was a team of scientists and paleontologists from Spain, a 3D designer from Taiwan, and many helpful fauna advisors throughout Tualatin and the whole state of Oregon that helped with research and contributed to accurately portraying the shape and size of this ancient animal. Once the clay portion of the sculpture was complete, I worked with a world-renown mold maker who created the molds for the bronzing portion of the sculpture. Finally, the remarkable team of master artisans at Artworks Foundry in Berkeley, California, over 4 months cast the piece into the bronze sculpture: a 7 and a half foot tall, 56 inch wide, 14 foot long mastodon weighing over 2500 pounds. This project was the idea of Fred Bruning, the CEO of CenterCal Properties.