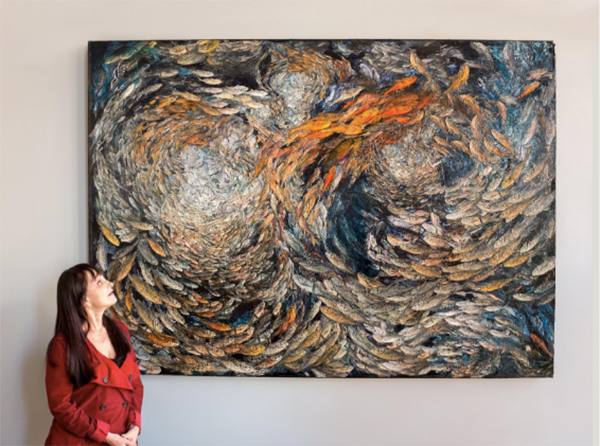 “There is nothing that makes its way more directly into the soul than beauty.” wrote the essayist and poet Joseph Addison.  Deeply moved by his exposure to the paintings of Raphael he composed this couplet:

‘Where from the mingled strength of shade and light
“A new creation rises to my sight.”

These two great themes: the human need for the beautiful and the powerful effect of mingling light with darkness are evident in the works of master print-maker and public artist Rosemary Feit Covey. “I strive for beauty in all I make. My work also lends itself to interpretation, people very often see stories in my pieces.”  Feit Covey creates imagery that elevates the natural world to the realm of allegory and fable. “My work is often born of deeply moving experiences, my own personal stories and my explorations of wild landscapes. But I want the audience to draw their own conclusions about meaning. My concern is that they feel in-tune with the work and hopefully inspired.”

Covey’s large mixed-media print “Fish” is a perfect example of this.  As if looking up from the bottom of the sea, two enormous schools of fish, one red-gold, and the other silver-blue draw the viewer in through their spiral dance. The image is one of ascent from depth to height, from dark to light.  A feeling of hope pervades the work. The fish shimmer like flashes of lightning in some great Romantic cloudscape- or like flickering lamps hung in a domed church.

Covey’s choice of settings range from the solitude of blue-green polar seascapes filled with glittering icebergs to the dense, lushness of tropical jungles out of which monkeys peer and through which jeweled hummingbirds dart and flash. The decorative quality of the work belies a deeper, and sometimes darker subtext: nature is the bountiful origin from which all this beautiful life springs, but it is also indifferent to our desires and frequently dangerous.  “I don’t shy away from darkness, but I am always aware of the fact that the more ominous side of life is not removed from the parts that charm and delight us.” says the artist. 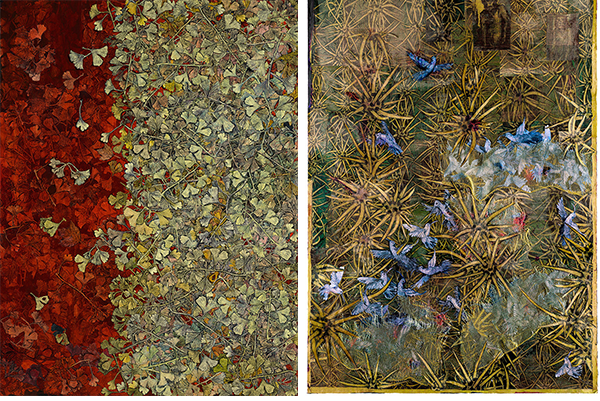 Writing more than two centuries ago philosopher Edmund Burke defined the peculiar thrill of overwhelming awe in the face of nature as “the sublime.”

One feels both somewhat insignificant in the face of cosmic forces and also somehow enfolded, even embraced by its majesty.  When asked about her feelings on the sublime Feit Covey smiles. “Indeed. That’s a great word to describe what I’m often going for here- the wonder we feel before the bigness, the mysteries of nature.” 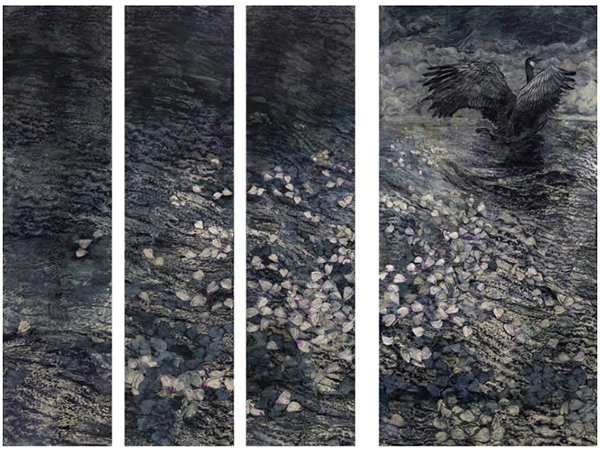 The flight of a wild goose across an expanse of dark water scattered with flower petals and reflecting what might be moonlight is another example of picturing the incredible drama of nature. Wings outspread, the Canadian gander appears like an emblem of something heroic and also fleeting. The bird is about to take flight and the viewer is held, arrested at the moment before the creature lifts up from the waves into the air. The intensity of that moment- suspended between elements- is softened and framed by an expanse of waves that become an abstraction. Evocatively titled, “Not a Day Goes By”, the piece is one of Feit Covey’s multi-paneled works which create a feeling of staring out of a magic window into a world of dreams or of seeing an alternate reality folding outwards (or is it inwards?) like a fan. There is something musical here- indeed one can think of this and many other pieces by Feit Covey in terms of nocturnes, symphonic movements or impressionistic music. 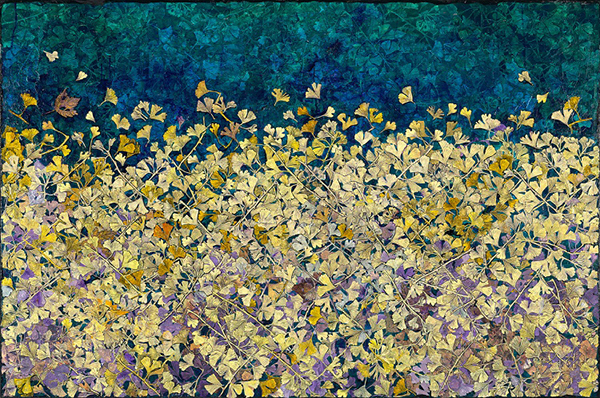 Feit Covey’s dense layering of colors and textures, her use of rhythmic lines and her often Baroque organization of small forms into waves, spirals and billowing curves shows a deep familiarity with the power of decorative sensuality. “Klimt, Schiele, Munch- those great expressionists are all sources of inspiration. I don’t have a problem describing the work as decorative- I want to make work that brings people pleasure and enhances their space.” In her rendering of gingko leaves turning various shades of yellow and gold, the eye is invited into the depths of the picture. The background glows with a blue-violet light- the gingko leaves appear to be sinking into water or swallowed up by the murky shades of twilight.  Here again, light and shadow work in tandem like well-matched dance partners to great emotional effect. 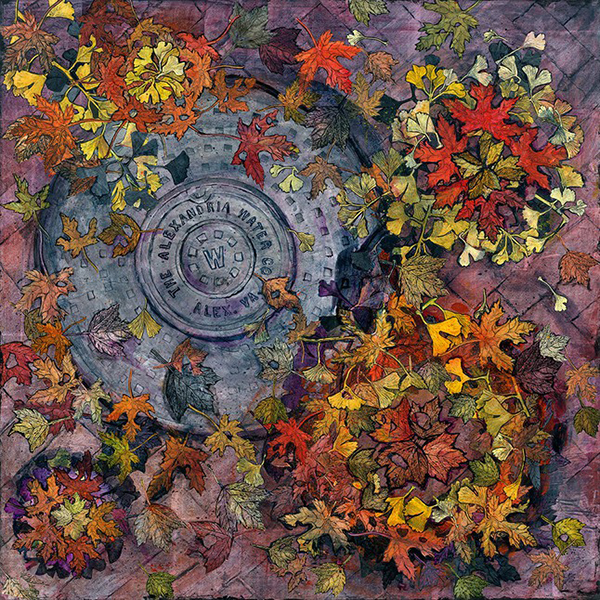 In “Kaleidoscope of Leaves” an iron manhole cover is transformed into a mysterious shield, surrounded by and partially covered by autumn leaves. On closer inspection, one realizes that the fallen foliage has arranged itself into a series of almost perfect mandalas- as if Nature was trying to communicate by mimicking the form of the human-made object.  This reversal of agency (nature copying art) evokes the dream-like through a subtle surrealism. 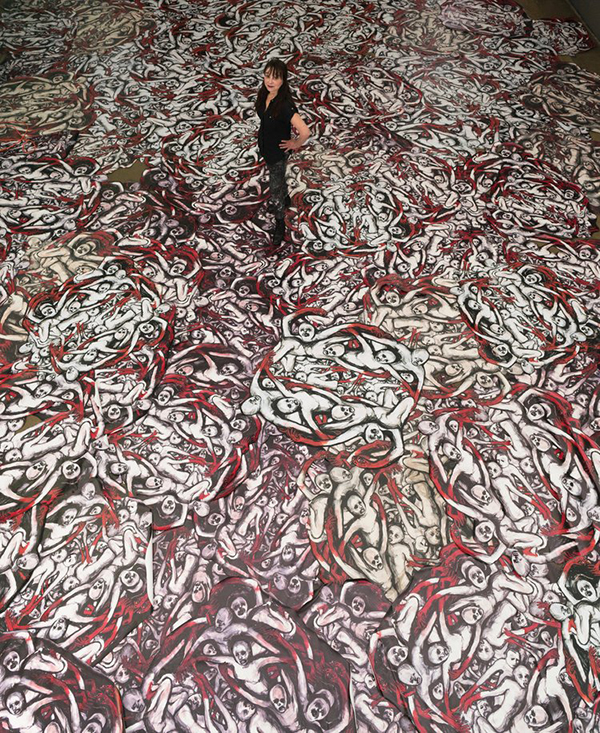 Dynamic sensuality isn’t only reflected in the natural forms that Feit Covey chooses but in the print materials themselves. “My work is almost always 3D.  I like to overlay images and combine elements. The process of making the work is very physical, very focused. I think that the care I take and the attention I give to detail is evident. I hope the passion I feel as I create is captured in the materials.” When asked how she achieves these sculptural effects Feit Covey says it’s all about patience- it’s also the result of many years of experimenting with her own special recipes of inks, glues and papers- and various technologies from old school spoon rubbing to Xeroxing to the latest cutting-edge printing technologies.

“Scaling up has been very important in the last several years. I’m at home with taking my work, expanding the elements and allowing it to fill up walls, columns, floors and even entire public spaces.” Feit Covey’s largest installation to date is her monumental “Red Handed”.  The piece itself is made of many interlocking portions that can be arranged in a variety of shapes and added to or subtracted from to fit the environment. The work is made of clusters of human figures rendered in black and white, each one with hands and upper arms stained bright red.  Viewers become participants in the sweep and rush of this storm of souls- walking into them as one enters a great body of water. But what is the story here? What is the meaning?

“That’s entirely up to the audience.” Says Feit Covey. “The impact this piece has had is due to its ability to move people emotionally and to suggest- but not to dictate.” 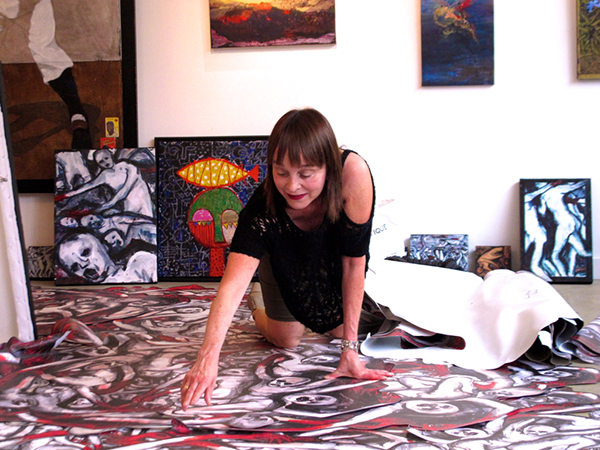