“All good things come by grace, and grace comes by art and art does not come easy.”
–Norman Maclean, A River Runs Through It

So reads the epigraph to Wagner Murray Architects‘ visually stunning 2007 monograph, Visual Performances. It’s a telling thing that a portfolio of architectural projects by a small firm in Charlotte, North Carolina, would begin with a literary observation on the effort, practice, and time it takes to master one’s art. But Wagner Murray Architects is not your typical firm—and firm owner Dave Wagner, AIA, is not your typical architect. 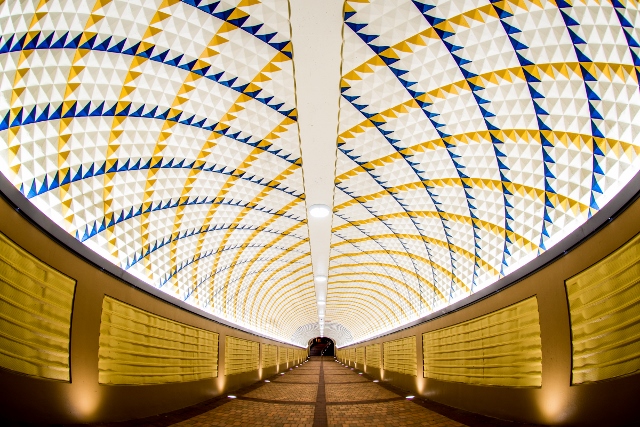 For Wagner, the words have come to represent more than a beautiful sentiment: they are a philosophy for a life’s work. A practicing architect for the past forty-five years, Wagner has seamlessly embedded this art-centric doctrine into his firm’s mission, not only incorporating original artwork into as many of its projects as possible but, when necessary, serving as champion for its inclusion.

“We are primarily architects, not artists,” Wagner says of the firm. “But we look for ways we can integrate art into every project, whether we create the art ourselves or hire artists to create it for us.” Since its founding in 1990, the firm has sought a balance between performance and proficiency in many of the projects it has undertaken. More than an aesthetic add-on or status symbol, the inclusion of art in the firm’s projects represents a civic duty to Wagner, a benefit to the building’s owner and its visitors alike. 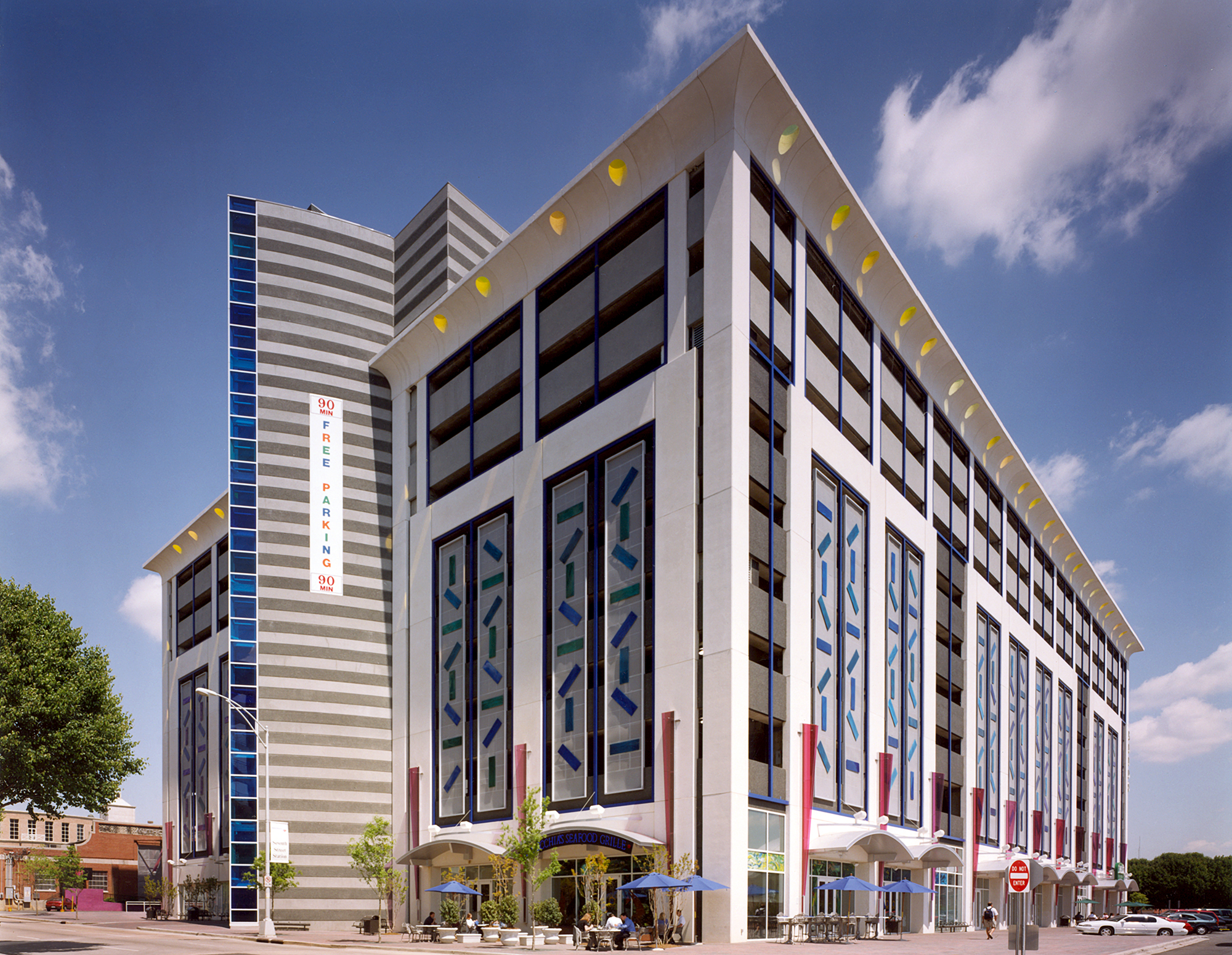 It’s not always an easy sell these days, Wagner admits, noting that waning Percent for Art programs have taken a toll on the inclusion of art in many project budgets. Clients have changed, too. “The architecture world has radically changed since I started in the business,” says Wagner. “Many of the clients I was working with when I started out are now either retired or gone. These early clients were national banks and corporations, places that traditionally collected art for their businesses. Convincing those clients to include art was never a problem, but now my clients are much younger, and they may not share my same philosophy on the inclusion of art in their buildings. I sometimes find myself having to convince them that this is a good thing.”

To that end, a Wagner Murray Architects project begins with art in the rendering. “We think about art and artifices at the beginning of project,” Wagner reports. “We try to think about ways to make art work in any given space—it’s just part of our design process.” During the presentation phase, Wagner makes a strong case to his client for the inclusion of art.

“I explain to them that art is a good value for their business,” he says. “It improves the profile of a building. It sensitizes the viewer to the environment because people appreciate art. Oftentimes, our subconscious connects to a visual image, whether colorful or not, that tends to draw our attention to a space and thus emphasize the unexpected. At other times, art adds an inspirational aspect of the development of a design or a project.” The inclusion of art, he adds, can help create a unified design and a memorable experience for the visitor.

Citing one example, Wagner recalls a lobby project the firm was redesigning for a forty-year-old high-rise. “The occupancy rate for the building before we began the project was at about 60%,” Wagner recalls. “I told the building’s owner that if he approved the artwork we were proposing in the redesign that they’d significantly increase the occupancy, and that’s exactly what happened. Once the community saw what was happening in that building with the redesign and the artwork, they saw that it was the right place for them to be. It was cool. There’s a ‘cool’ factor to what we do, and people like to be in cool spaces.”

A small firm with twelve employees, Wagner Murray Architects has amassed an impressive array of constructed projects, from boutique retail spaces and restaurants to (multiple) NFL football stadiums and public spaces. And while the firm has completed projects throughout the Southeast United States, their work has left its most significant and unmistakable imprint on Charlotte. From City Center to suburbs, the Queen City is filled with art-centric buildings and public spaces thanks to Dave Wagner.

The Green, for example, a one-and-a-half-acre park Wagner Murray Architects completed for Charlotte’s City Center in 2002, incorporates a number of art pieces that thematically integrate education in each of the park’s separate areas, including large-scale sculpture, water features, and wayfinding devices to complement the park’s palette of colors, textures, and forms. Wagner personally served on the arts administration committee that selected the artists and got the bank to buy in to its construction. The park was later awarded with an international design award for the best small public park in the world. 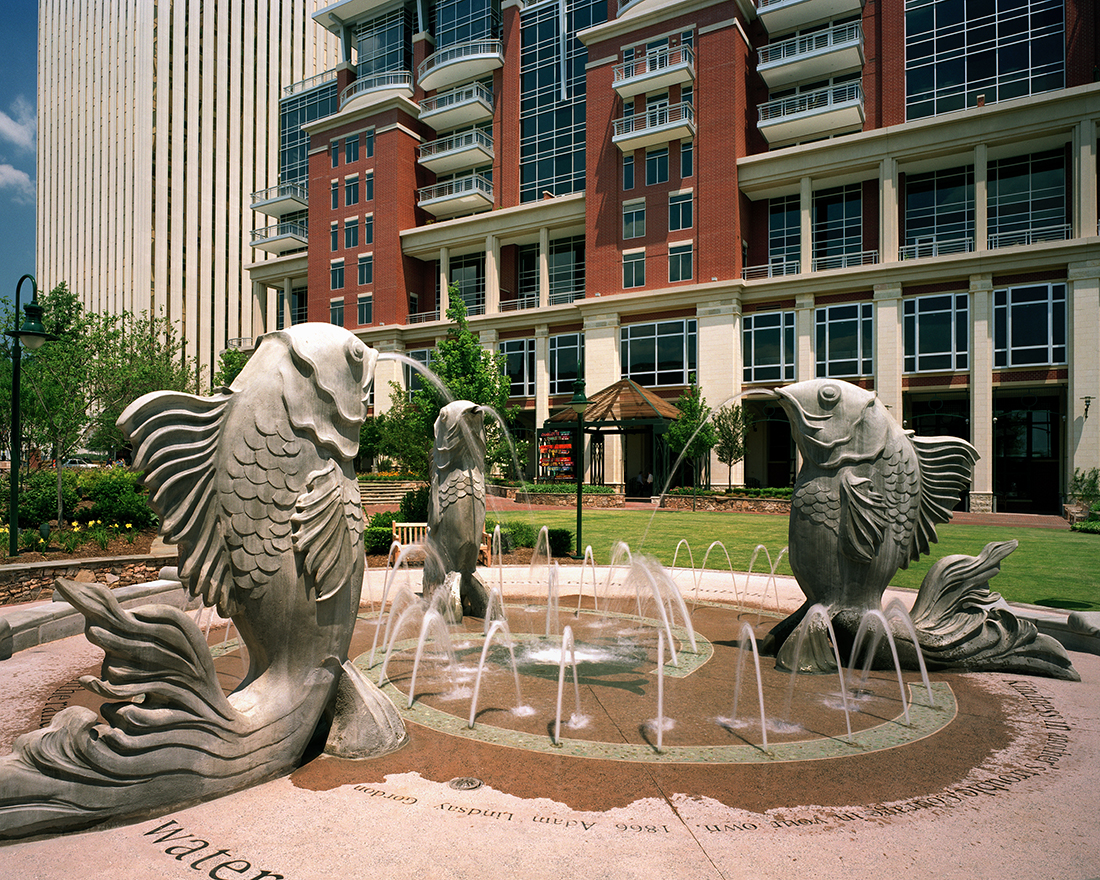 The Green, Charlotte, NC
Jonas and the Whale – installation by Caroline Braaksma with Wagner Murray Architects

Charlotte’s Seventh Street Station, a parking facility completed by Wagner Murray Architects in 2001, likewise integrated artistic installations to remarkable effect. Rather than create a bland, utilitarian parking deck, the firm instead created a “high-style visual statement,” incorporating 416 dynamic painted panels on its facade and 20′ hand-activated torchieres that light up and play a series of musical notes composed by Christopher Janney. A collaboration between Bank of America and Charlotte’s Arts and Science Council, Seventh Street Station is functional, artistic, and playful, creating a building that provides an interactive experience for visitors.

Not all projects require massive budgets to incorporate impactful art. The firm’s Corridor Project, a pedestrian tunnel completed for Wachovia Corporation in 2002 was completed for a total budget of $60K and includes one of its most dramatic works of art. Employing the use of Fredrick Munsell’s nineteenth-century color theory, the walls of the tunnel are painted in a sequence of bold colors on a series of zigzag panels, visible from either direction. While there is often a good deal of noise and activity on either end of the tunnel, once visitors step inside they often become quiet and contemplative. Rather than function as a simple passageway, the tunnel instead becomes an event.

While Wagner Murray Architects can boast several awards to its name, its owner instead prefers to fly under the radar, not looking for claim but focused on creating architectural experiences designed to raise artistic impact and awareness in Charlotte and cities beyond.

“To influence someone in a big way, you must first influence a lot of people in a small way,” Wagner posits. “Architecture, as well as what we do as architects, is about the environment, the space, the place, and how we react to these environments we create. Our firm delights in creating small experiences that accumulate so that they can make a larger impact within the communities in which we work.”