Over recent years, the concept of art for social change has risen to the top of priorities in the art world, joining traditionally appreciated values like beauty, craftsmanship, and the ability to evoke emotion. Art for social change has as many approaches as there are artists, yet one common long-standing category that’s up for revision is our memorials. An empowered public is asking new questions about representation and the writing of history including who, how, and why we memorialize, and whether the ideals represented in past public artworks reflect the views of a modern audience. Along its 40-year history of projects and clients, Art Research Enterprises (AR), a leading producer of fine art castings and fabrication, has had the opportunity to create such projects that further the cultural value and perception of place and history through the creation of art memorials.

In one such project, “A Gathering at the Crossroads” (2020), we can see how complex and nuanced the execution of a new monument may be – particularly one that will be placed on government property. “A Gathering at the Crossroads” celebrates four influential African American abolitionists depicted in life-sized bronze, Ms. Frances Ellen Watkins Harper, William Howard Day, Jacob Compton, and Thomas Morris Chester. They stand together around an orator’s pedestal commemorating the 15th and 19th amendments, as well as the Historic 8th Ward of Harrisburg, Pennsylvania’s capital. The allegorical gathering celebrates a real-life moment filled with readings and prayers from the city’s residents, who poured into the streets upon the passing of the African American right to vote. On the pedestal’s sides are inscribed the names of 100 legendary leaders of the Old 8th Ward, the names of current pathfinders, change agents and history makers, as well as emblems of sponsors of the project. 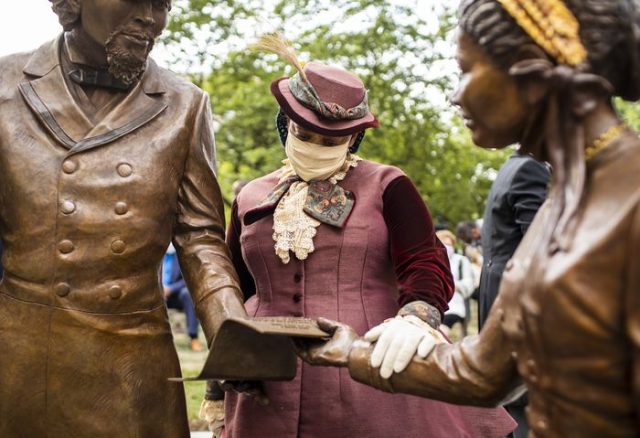 The 8th Ward had been an ethnically diverse and thriving neighborhood, which was displaced by a government annex in 1917. There were public schools, churches and synagogues, businesses and manufacturers, even a small foundry, not to mention all the homes and families that resided there. Through AR’s research and design process, they were able to reconstruct an aerial view of the former neighborhood with businesses and names. Their research led to several books and ongoing courses about the area’s history, passing the knowledge forward. Choosing this memorial was an act of historical reclamation commissioned for the Commonwealth of Pennsylvania, and made possible by a coalition of over 40 organizations and 200 individuals. The piece took 4 years to complete, and had to be approved by the House and Senate. Testament to the significance of the venture, the capitol building had not had a public sculpture placement in 100 years. These sculptural figures represent the use of voice and action in shaping our community, and their presence is a reminder that we must continue to speak up for justice.

“If you don’t change, you’re not growing,” says artist and President of Art Research Enterprises, Becky Ault. In order to stay current, the studio makes a point of regularly CHANGING: updating equipment, painting, and moving around its departments, “so that we aren’t always comfortable. We’re not putting ourselves on the edge in a negative way, but in a good way, ready to receive change from the outside world.” This kind of conscious evolution makes for circumstances that take advantage of the latest developments in technique and technology, and also creates the circumstances to respond to the demands of the public, which are complex and multi-sided. As a company that offers historical conservation, AR works on both sides of the memorial divide, building new pieces that reflect new values, and conserving older icons that have come down, helping to catalog our cultural history.

AR began over 40 years ago as a service for all artisans, museums, conservators, and anyone who needed three dimensional fabrication in the arts. The company notes a major shift that occurred around the turn of the 2000’s that brought forth 3D printing technology, which changed the culture of fabrication and opened it up to many new artists. Around this time, the company used the emergent technology to create an intricate sculpture by Santiago Calatrava. 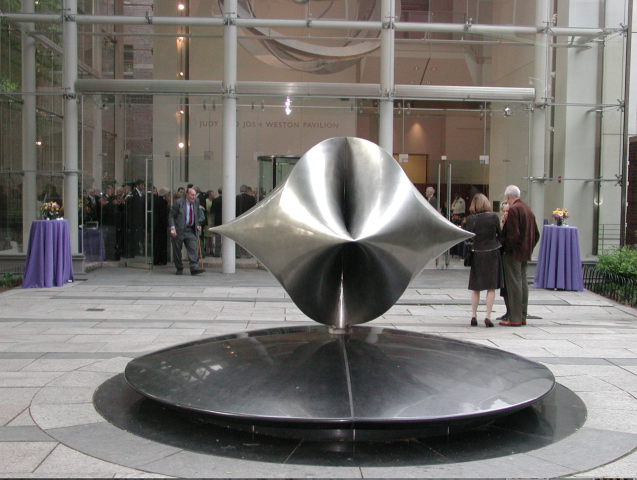 “Time Capsule” is an 8 ft wide piece of metalwork that has an organic exterior resembling origami or folded fabric. The structure serves as a time capsule with 16 different compartments, each intricately fit like jewelry. An article in the NY Times posed the question: “Who’s going to open it 1000 years from now?”. Over 20 years later, the question only gains in significance amid economic uncertainty, pandemics and climate change. If the piece were to be compared to the monuments that surround us, “Time Capsule” might be a monument to hope… that civilization will persist and engineer its structures for the better. Ault speaks about the “magic of metal,” how in its raw form it retains that sense of primordial alchemy that represents resilience and mastery. The simple, fluid and seamless finish of the “Capsule” reads as an almost alien form, difficult to execute by human hand, yet testament to our power to shape our material world.

Regarding social impact in a very direct sense, pieces like “Time Capsule” and “A Gathering at the Crossroads” create and sustain employment for the type of large team that it takes to fabricate pieces of this scale and ambition. Sourcing materials extends the economic web even further, beyond the studio. The city and county employees, all the people who prepare the site, become part of the family of the sculpture, as do the visitors who interact with it. It’s the artist who begins this blooming economy, creating value beyond the object. Social artworks create their own life and points of reflection, connecting viewers with a place and time in history and a present proposition.