To Dazzle and Delight: The Fiery Forms and Expressive Energies of April Wagner’s Glass

Glass is a substance of contrasts that never ceases to fascinate.  Crystal granules are melted into a dense fiery liquid that can be twisted, pulled and poured into an endless variety of shapes. We are amazed by its apparent strength, but with an underlying delicacy. Glass captures the human imagination!

April Wagner, master glass artist, explains this deep physical response: “Working with 2000-degree molten glass is immediate, intense and visceral. In my work, I strive to capture that moment in time when the glass goes from a liquid to a solid - that ah-ha moment when you see something ethereal and you capture it. This is why I named my studio 'epiphany.'” While Wagner’s epiphany studios focuses on exquisite vessels, vases and ornamental objects, Wagner’s large sculptures are found in hospitals, corporate spaces and institutions of learning as well as private clubs and homes. In all of her works Wagner maintains a strong through-line of inspiration drawn from natural forms and primordial elements.

The concept of epiphany is traced back to ancient Greece. An epiphany was not only having a sudden bright idea; the word could also refer to the sudden appearance of a divine power breaking through the veil of reality in a burst of light.  Wagner and her team bring both of these definitions to bear on small and large-scale works alike. It isn’t only light that is gathered by the curling ribbons and curving waves of glass, it is the viewer’s attention. “My goal is to activate the space in a way that stimulates the viewer most effectively.” says Wagner.

This activation is due in part to Wagner’s ability to capture gesture and joyful rhythm in her chosen medium. “Choreia” is the name of a ring dance with colored scarves mentioned in Greek mythology and “Violet Eddies” is allusive to evening skies reflected in the turning of tide pools or meadow streams. A careful survey of Wagner’s wide-ranging output evidences this sensitive incorporation of lilting and languid motions into every one of her works. 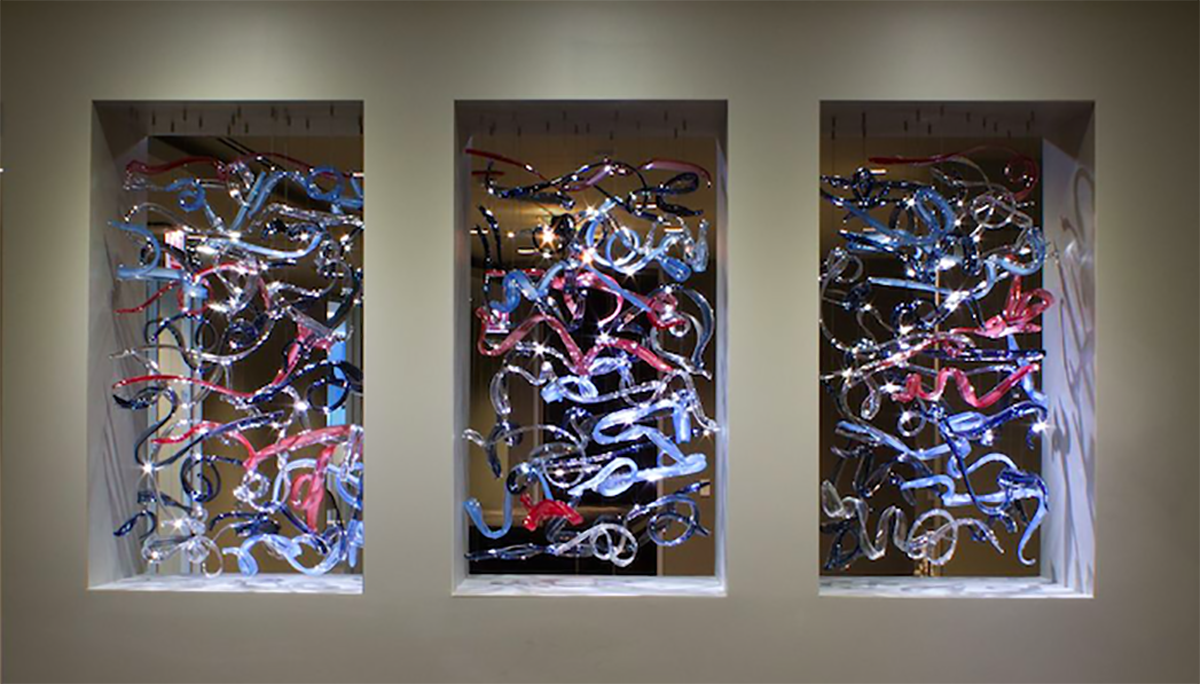 An untitled suspended sculpture made of shimmering ribbons of glass. (Photo: epiphany studios) 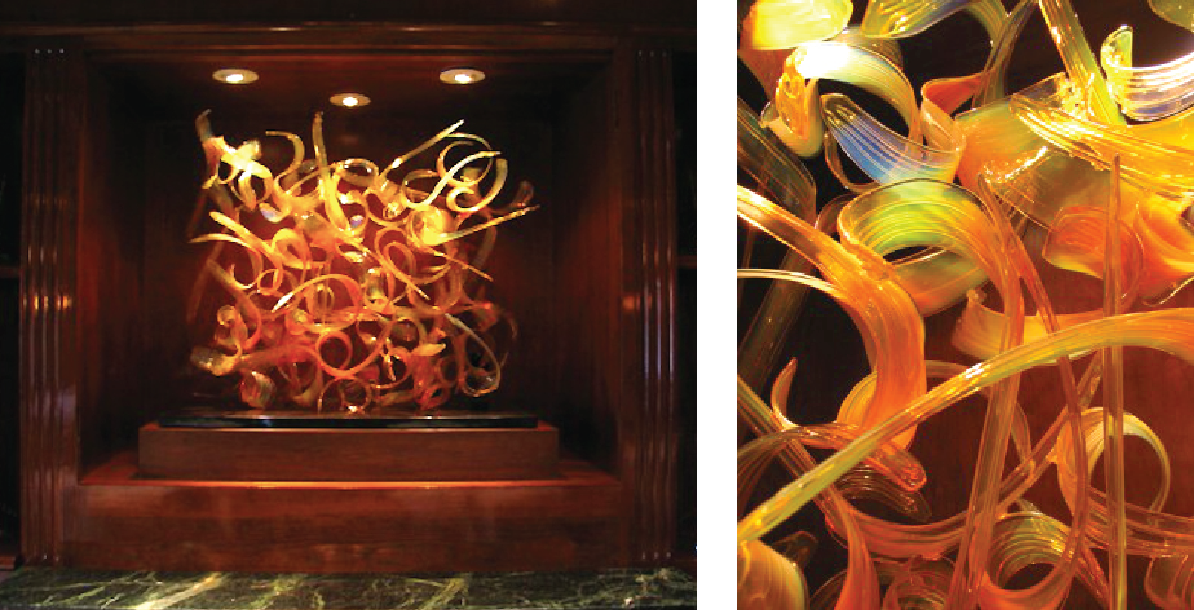 In 2018, Wagner was the subject of a one-person exhibition entitled “Molten Sensuality” at the Saginaw Museum of Art.  During this time she discussed her process “By turning, twisting, or repeating the shapes, I investigate the relationship to floor, wall, or tabletop. In creating multiples and assembling the shapes together, almost like found objects, I create large scale pieces. Color to pushes and pulls the eye around or up and down the piece.”

Fire, the transforming power behind glass, is summoned to become the main subject in a number of Wagner’s dazzling works including “Solar Flair.” This carefully crafted assemblage of glass flames arranged against black granite is the central artwork for the restaurant of the Townsend Hotel in Birmingham, MI.

Aspects of the plant realm- roots, vines, branches, blossoms, leaves- are rendered in glorious Technicolor hues in Wagner’s immense wall-pieces including “Primary Fete” and “Bello Fiori”, the first made for the wall of the stairway of a private residence, the second for the lobby of a St. Joseph’s Hospital in Pontiac, MI. While these big assemblages of bright flowering forms imbue the spaces they occupy with a bold elegance, they do not lose any of the whimsical and intimate charm of Wagner’s smaller floral works such as “Rabbit Lives at Claire’s House” in which the viewer is invited to descend into a delightful wonderland of ornate flowers and fungi.

The Welcoming Beauty of Glass and Light

Reflecting on her public sculptures Wagner says: “Every space is special but it's the viewer that is truly unique. When I am creating I ask myself this: how do I want the viewer to react when they see the artwork? Every space is a canvas that the artwork should complement and enrich- but understanding how my creations will impact the viewer as they occupy that specific space is really central to what I do.”

Suspended sculptures and ornate chandeliers are a specialty of Wagner. One of the grandest examples of these intricate creations is “L’Eau de Vie” (Water of Life) consisting of several hundred handblown glass spheres and ribbons of indigo, blue, pale green and varicolored glass. Surrounded by a circle of spotlights, the giant spiral is a cascade of calm that echoes the pattern of a waterfall or of rainfall drifting gently down. The practicality of combining glass-art with lighting is something that Wagner says many of her clients appreciate when deciding on a commission.  Because the nature of glass requires that lighting always be considered in order to display works to their full effect, custom chandeliers are an excellent way to incorporate fine art and lighting as a single commission that can dazzle and delight the viewer.

Wagner adds: “I want people to step outside of themselves; to forget about their laundry, bills, or car trouble. I want them to be captivated and filled with joy at the awe-inspiring beauty before them.” 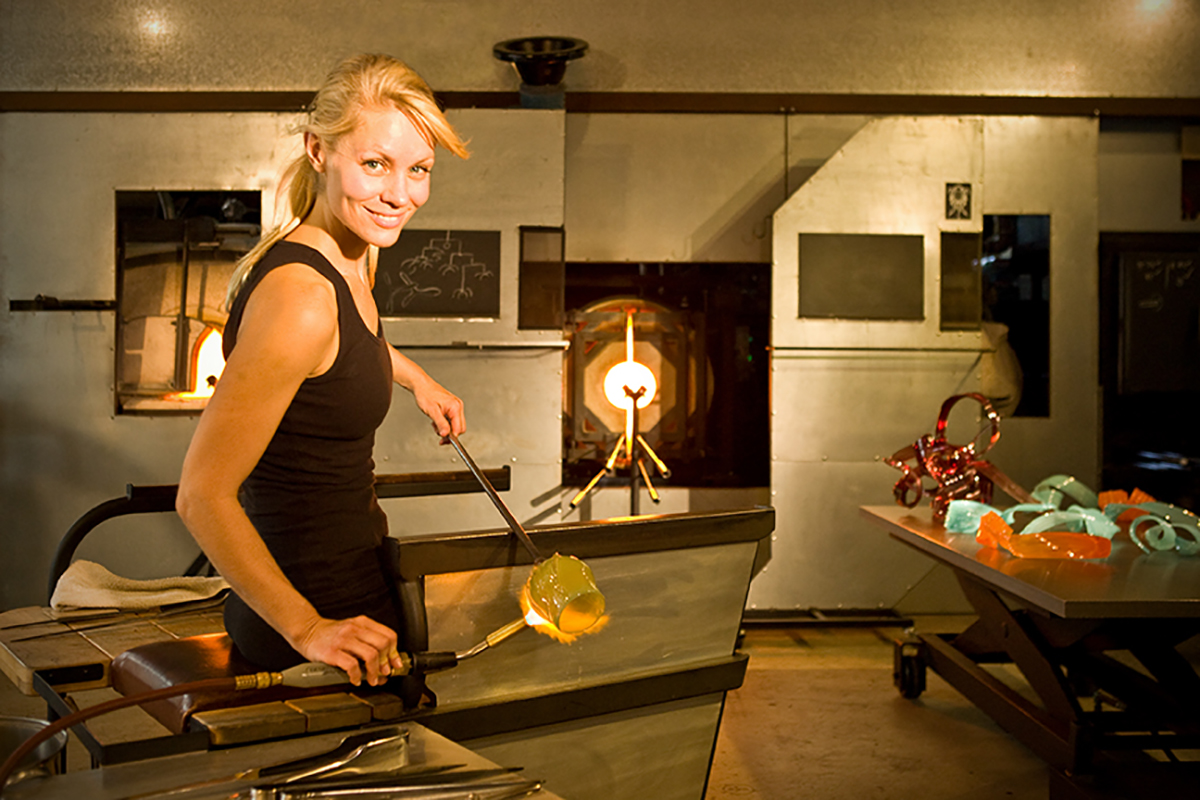