By: Sarah Muehlbauer for CODAworx

The relationship between art and architecture is something like water to the ocean. Architecture is the structure that contains our spaces, our communities, and our ambitions; art is the fluid medium that reflects our emotions and instincts, our need for beauty and the sublime. When operating in harmony, the sum is greater than its parts, affecting viewers on a visceral level. The best examples of art and architecture together produce ease, contemplation, structure that is supportive and uplifting, stable and reassuring, yet accommodating to the organic human form.

Working strongly with color, reflection, and inspiration from nature, Michael Curry creates unique mosaic wall sculptures for commercial, corporate, and private settings. With materials like silvered glass and acrylic resin, intricately cut and layered, these pieces exude luxury and finesse that creates a richness of place. It’s the kind of work you should view from many angles as it comes alive with light, changing form from each direction. There is a soothing repetition to the work, a kind of meditative appeal inviting mental reflection. Light is drawn in and fractured outward. Color and pattern create depth, illusion, and a mysterious science of light. 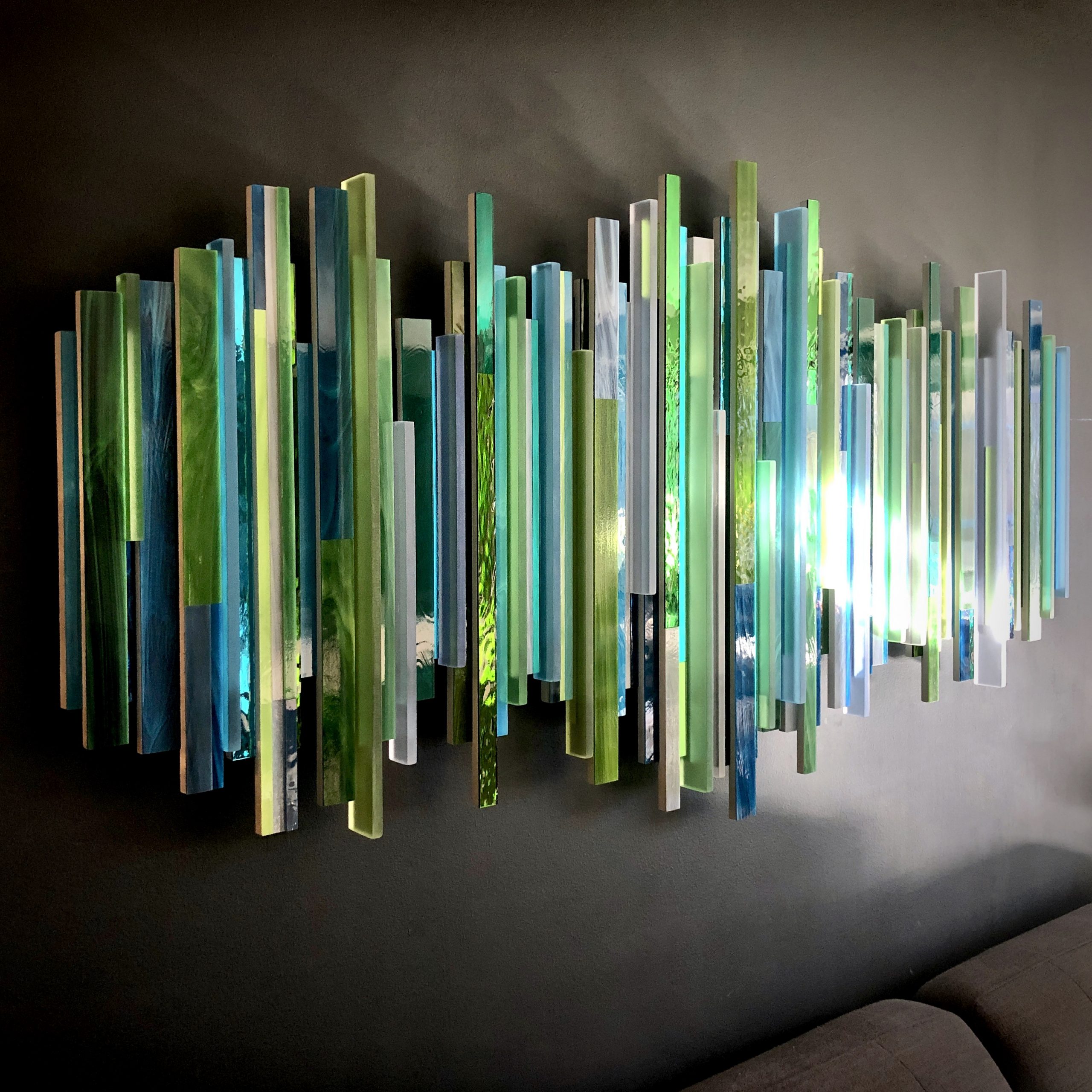 As a self-proclaimed “weird kid”, Curry’s childhood bedroom was his earliest studio, where he wrote stories and music, played many instruments, and created drawings and dioramas. Like many kids, he designed with Lincoln Logs, Legos, and PlayPlax blocks with total creative freedom. His earliest commissioned works were from a local schoolgirl who solicited drawings in exchange for candy. Somehow his future as a commissioned artist seemed more pre-destined than most, although in high school and college Curry moved towards music and theater. He obtained a graduate degree and went on to have a substantial career in performing arts, and eventually the Broadway stage. Curry spent years on the road touring nationally and internationally, living out of a suitcase as the performing arts often demand. Suitcases make little room for art supplies, and it wasn’t until he came home to NYC more permanently that his visual arts career took root.

Synchronistically, it was his performance work and the production of Cabaret that eventually brought things full circle for the artist. Curry moved back to New York for a run on Broadway, inheriting some furniture from a friend. This led to a midnight lightning strike of inspiration, to create a mosaic project out of an abandoned dining room table. When Curry reached out to his cast-mates in search of advice, he was directed toward Bobby Pearce, a regular guest of the Rosie O’Donnell show feature “Craft Corner.” Pearce taught Curry a few basic techniques to get started and donated glass tile samples to the project. The mosaic table was, and still is, the foundation of everything Curry does as an artist. It serves as his work table and sparked the growth of his second career. 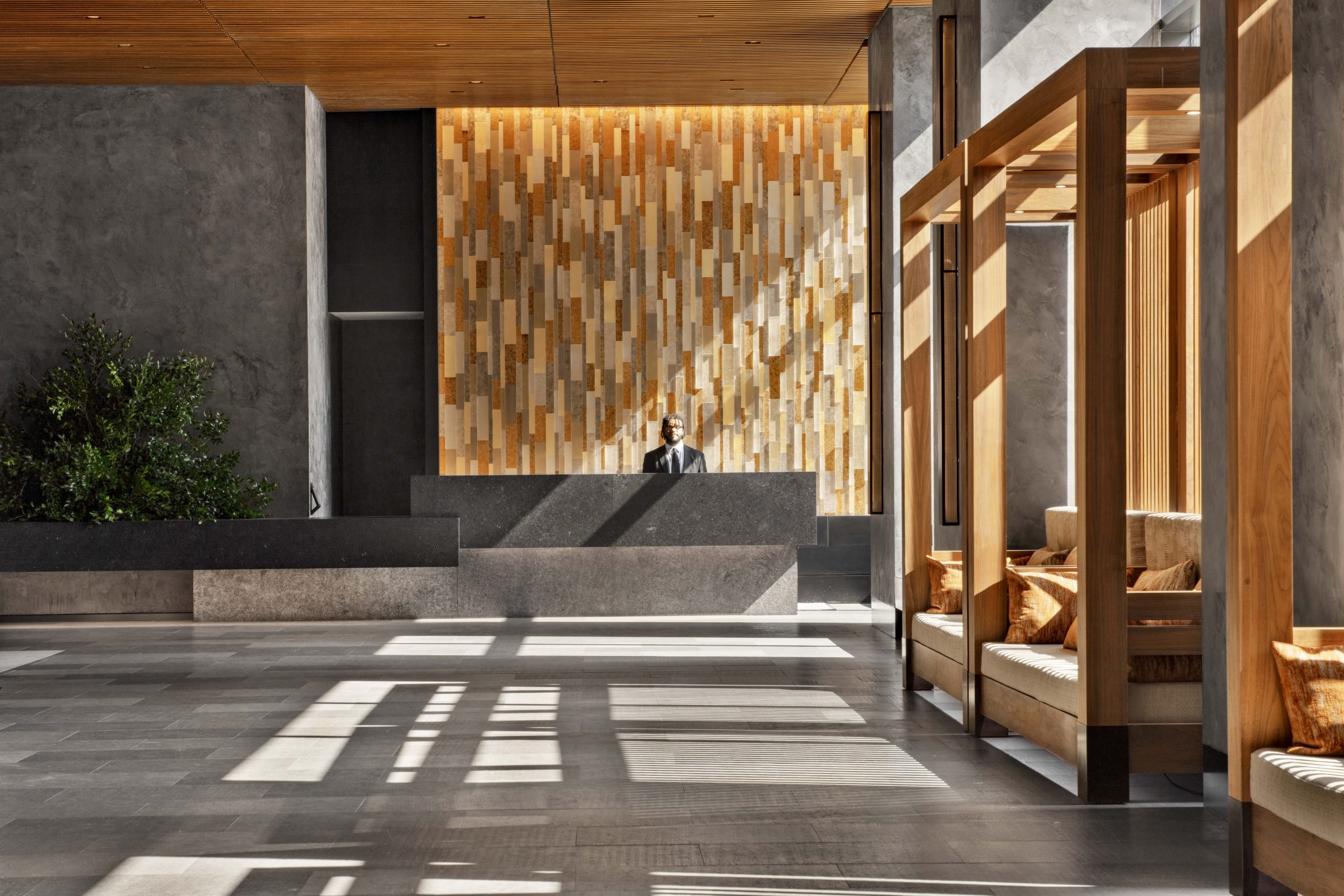 Fast forward to 2017, when Curry installs the Jackson Park Project. Brought in by Clodagh Design, Curry is tasked to create a glowing mosaic feature wall in the lobby of Jackson Park, a new Tishman Speyer residential property in New York City. It was to become a focal point, to promote the health of the residents, and to express qualities such as “subtlety, warmth, smokiness, and energy through shape.” Artists are accustomed to leaping into the unknown, the generative “push,” which Curry describes in this case, as a juggernaut. The process lasted over a year. It required expansion. OSHA certification. Team building. Working in a tower under construction with many things happening at once. Legal contracts, extra insurance. The *special* challenge of installing over a counter that had to be put in first, leaving just a narrow aisle for access. Adaptations were made, systems were built, a custom ladder was designed. These are the demands of architectural-scale work, which necessitates research and planning on a level beyond the ordinary.

The result became a 12.5 x 15.5 foot mosaic sculptural wall in ambers and greys with translucent materials and diffused light. The work sparkles and glows, recedes and moves forward. It incorporates the natural silicate crystal, mica, which is thought to remove stagnant energy and helps stabilize energy fields. The mica has been processed with resin, pressed into sheets and cut as if it were glass. When combined with a waterfall, fireplace, and cabana seating, the wall is the center of a cohesive design, an urban oasis. 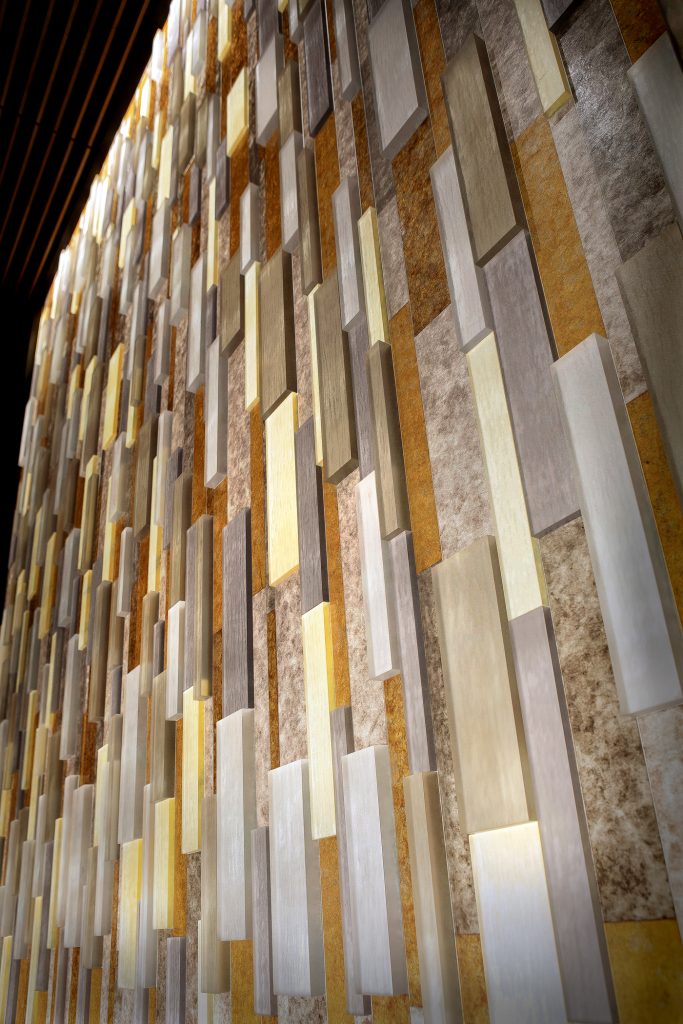 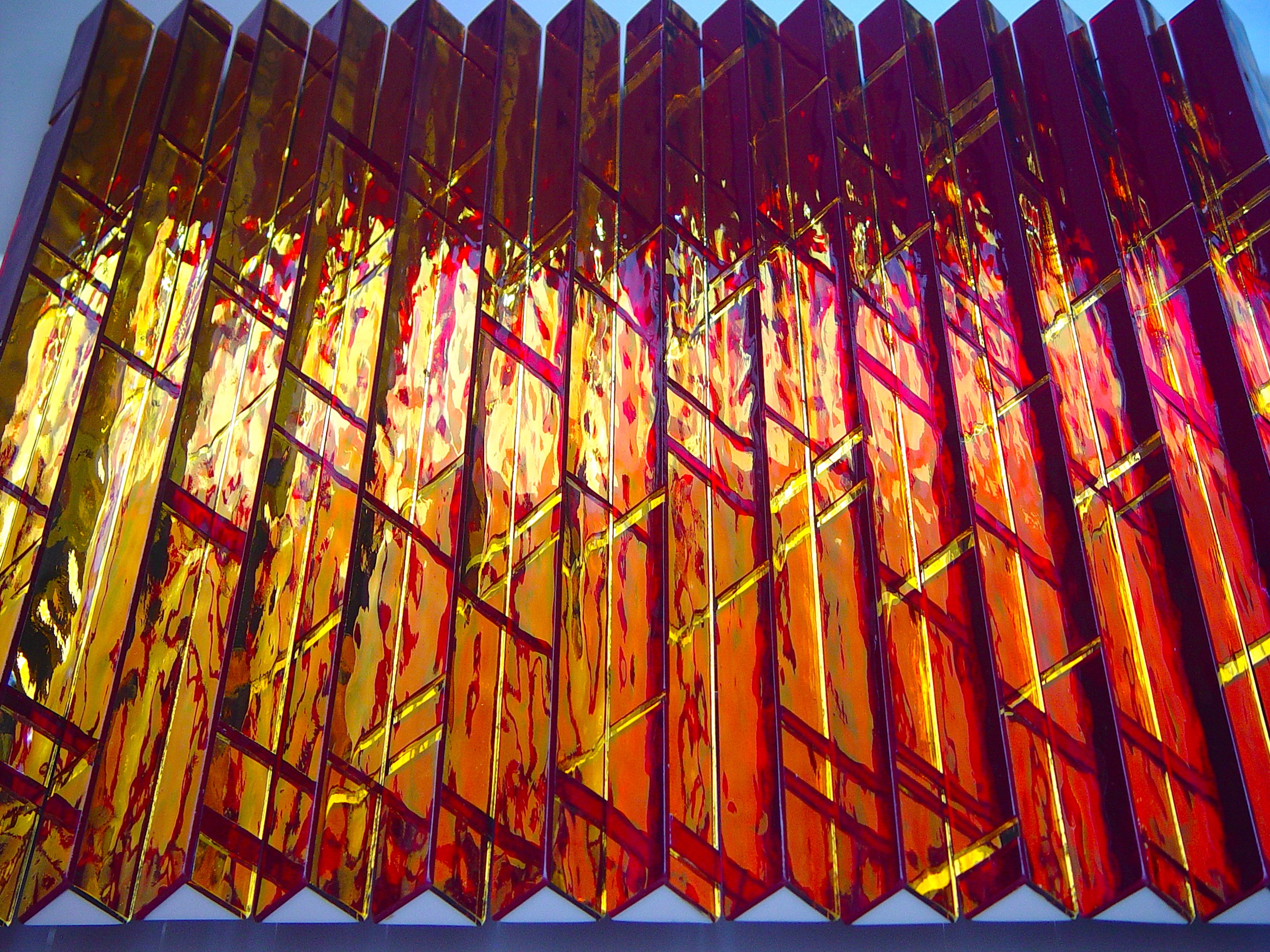 Curry speaks of “biophilia” and tracing inspiration from the work of Clodagh, the internationally acclaimed designer, who drew him to the project. Biophilia is the affinity between humans and the natural world, the literal “love for life” that drives us to interact with plants and animals. Environmental psychology suggests that buildings support us best when they echo “the scale and tone of the natural world through pattern, dimension, light, layout, and sound.” (Psychology Today). Architects and artists who incorporate these aspects create restorative settings with cognitive benefits like reduced mental fatigue and increased attention. They give us the ability to perceive vastness within our built environment. Biophilia is reflected in the work of Michael Curry, whose inspirations include rich natural phenomena like reflections on water, light, fire, sky, and clouds. Curry draws from fractal geometry, referencing materials of the earth. He translates skyscrapers into mountains, venerating the urban landscape as an extension of the human hand. Inherent in his approach is a fundamental curiosity and play.

Throughout the design and commissioning process, Michael Curry serves a collective vision and consideration of space. Everything is relational. Each project begins with questions, not assumptions. Curry creates myriad renderings to present his clients after opening up a democratic process that answers key questions: What is the existing color palette of the space, and how might that complement the client’s experience and desires? What is the foot traffic in the area? Where is the light? How do the conditions of the object’s destination affect the construction of the work? Glass is an “alive” material, expanding and contracting with the seasons. Each commissioned work is an investigation, a reflection, and a process. 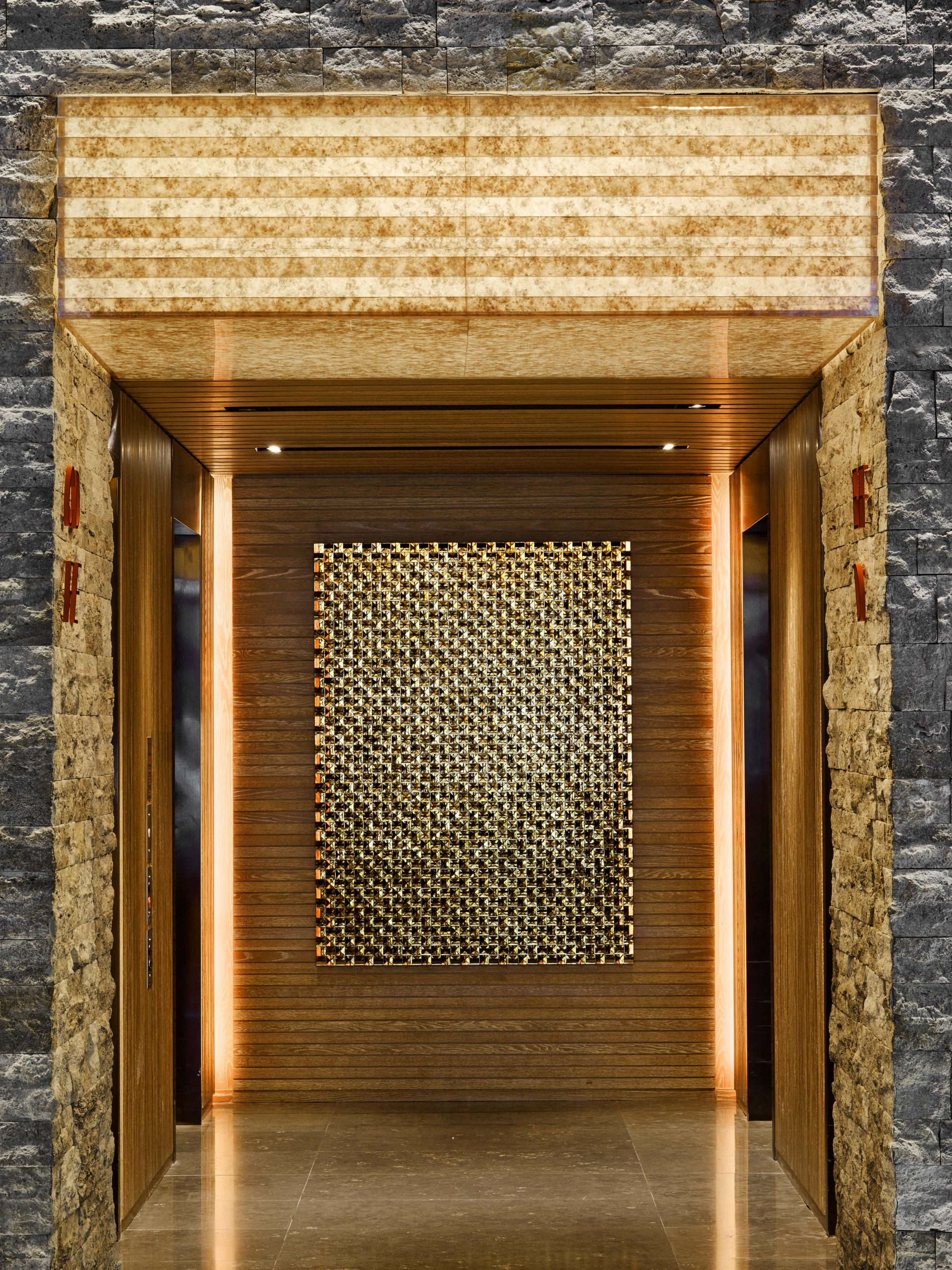 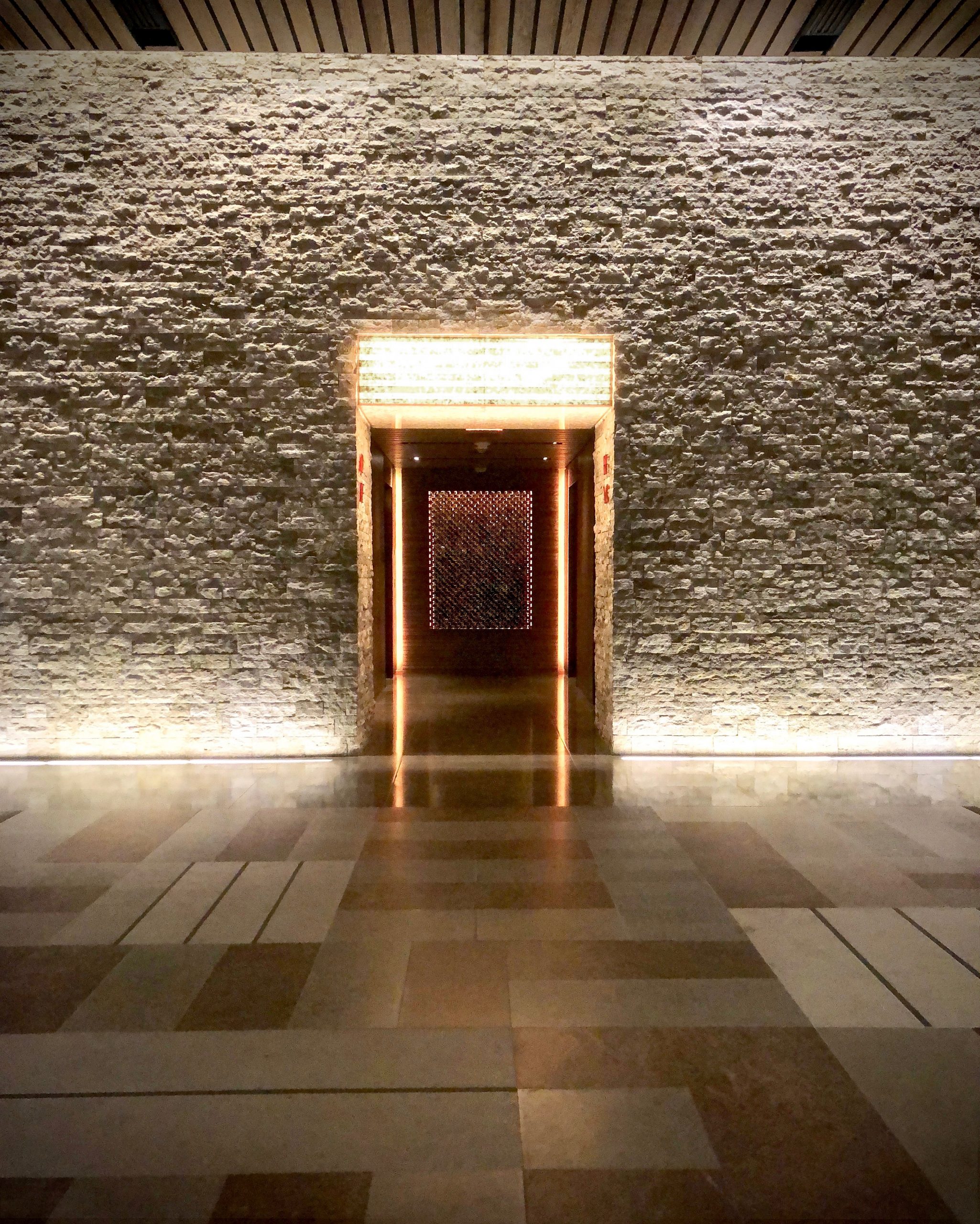 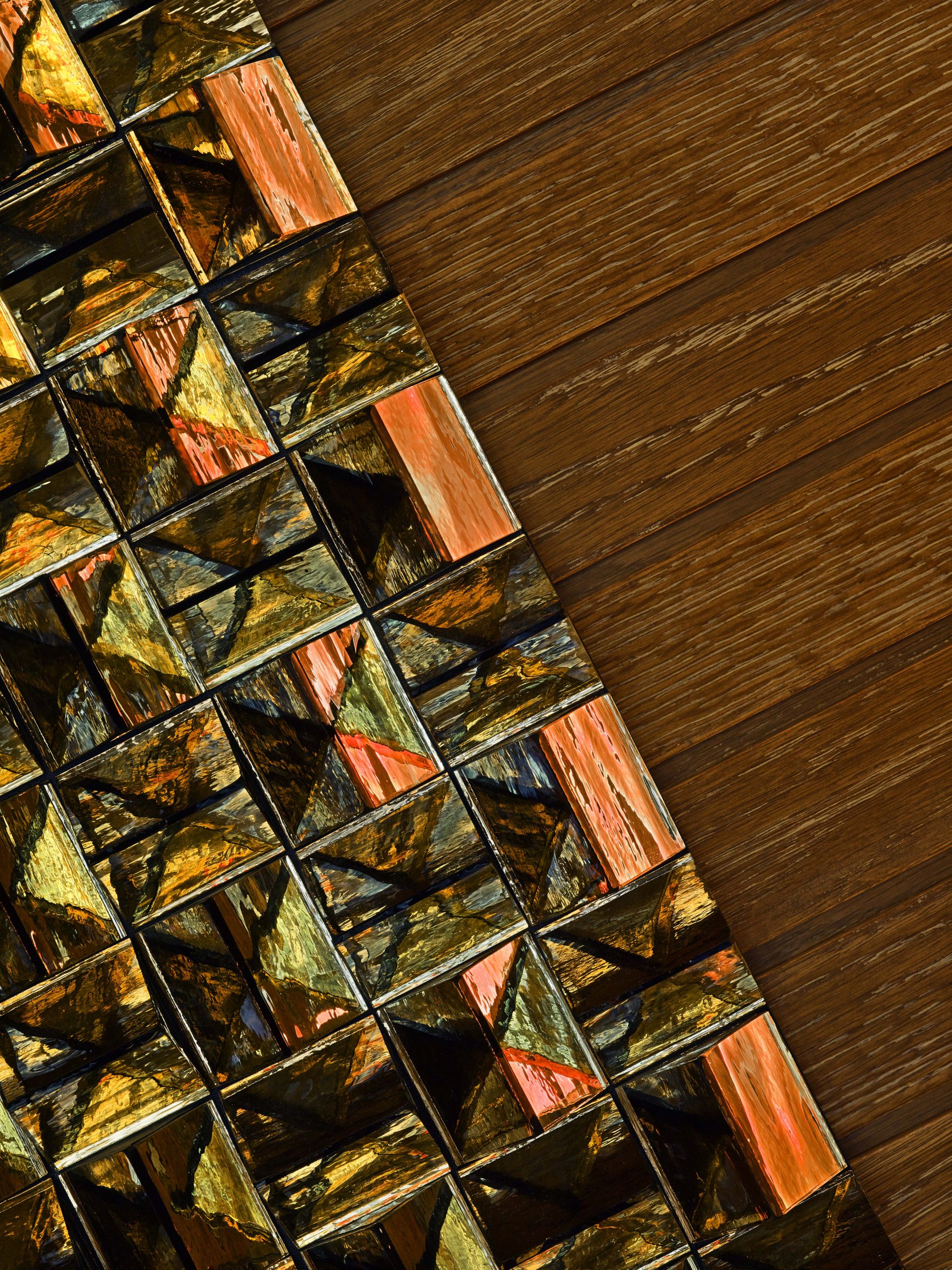 In color psychology, every shade has meaning, a vibrational effect amplified further when combined with light. Color impacts our biology. Curry states, “I have always had an extreme reaction to color, both emotionally and physically and it often drives my mood and informs my decisions. For as long as I can remember, green has been the color that speaks to me the most. Whenever I get to work with green it elevates me. When brainstorming with a new client, the color conversation is very important.” Green is of course tied to nature, helping us feel connected to the earth. In eastern systems of philosophy and the body, green is the color of the heart chakra. It’s the middle of the color spectrum, signifying balance and universal healing. And this is just the start. Each color contains its own unique signature, and these considerations make their way into Curry’s work, whether overtly spoken, or subtly understood.

Curry remarks, “Above all I am a curious artist: this is KEY for me: i.e. what happens if I make 900 of these beautiful mirrored blocks, stack them like so, and place them next to this window with southern exposure. Sometimes there is disappointment, but sometimes there is magic. And these are the creative moments I live for— when these ideas break through, it’s as if I’m not even there. Sometimes I dream these “what ifs” in great detail while I sleep and other times they come in an awakened flash out of nowhere— but this is what feeds me and propels me to find out what comes next.” 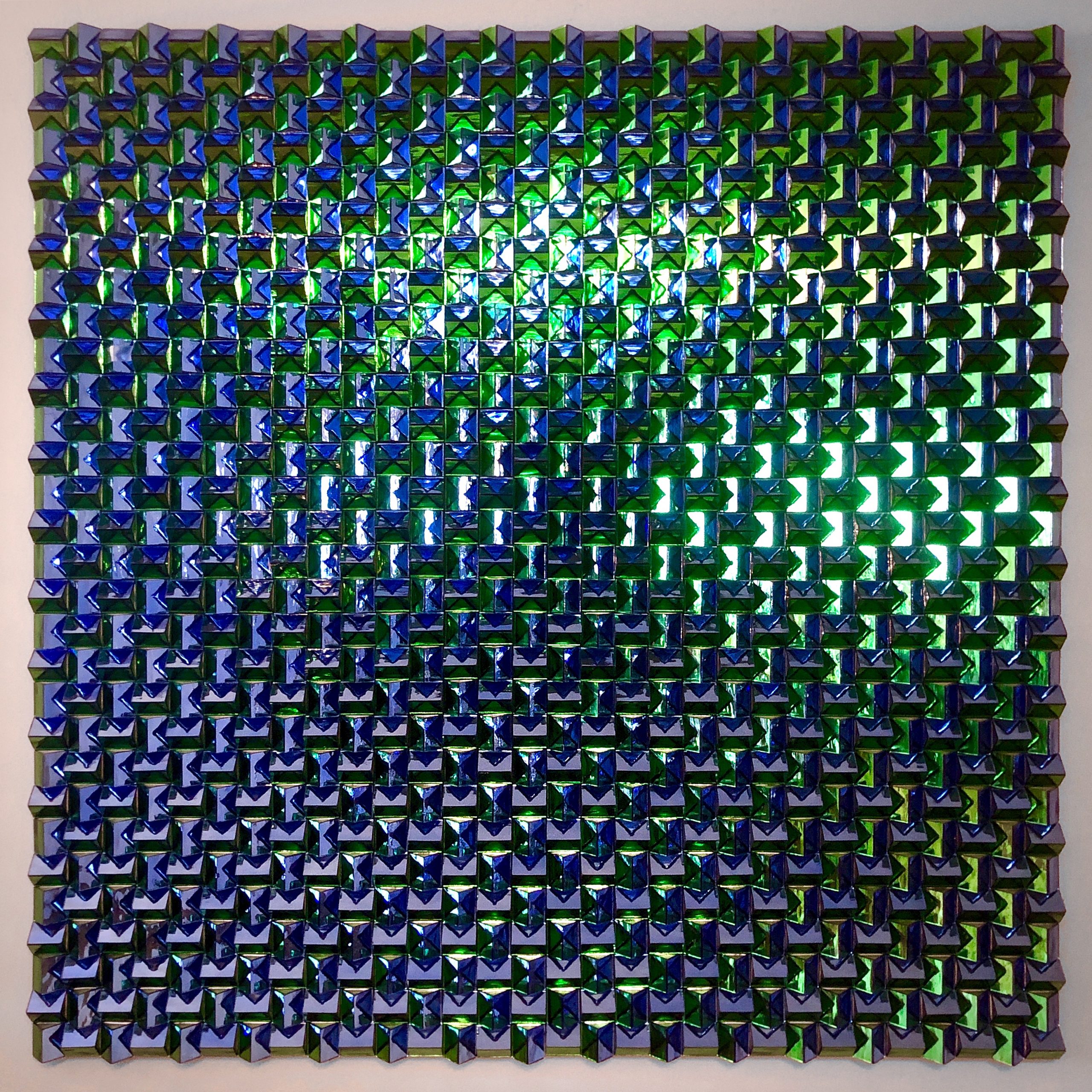 Speaking of next steps, Curry will participate in this year’s NY Luxury Design Fair at the Javits Center, where he’ll showcase new design concepts. The Fair is paired with the prominently influential Armory Show, where the world’s leading international galleries showcase works from modern masters and contemporary artists. No doubt this will bring an exciting confluence of art and design.

When asked about his favorite designs, Curry remarks on the “Reflection of Diamond”, a series of tessellated, mirrored blocks. The piece creates an unexpected secondary design, a formal illusion in the shape of a diamond made by the reflection of cut edges. The piece is angular and dynamic. Kinetic, alive, and changeable. Much like nature. Much like humanity. Much like art. 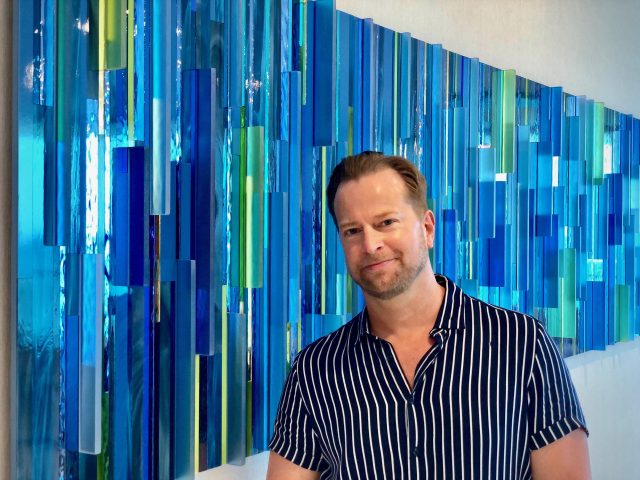