Standing Out, Shining Through: The Chromatic Constructions and Bright Collaborations of Deanne Sabeck and Jeffery Laudenslager

Iridescent wings and chromatic waves fan out from luminous centers. Words gently appear and then vanish in arcs of rainbow light; texts add layers of meaning. These organic, geometrical works, part sculpture, part light-painting, part poem are created by artist Deanne Sabeck. Utilizing the mysterious optical qualities of dichroic glass and spotlights programmed to change over time, the viewer is invited to slow down and contemplate. “I have a long history with glass as my medium.  The concept of using the light spectrum directly to create reflected and transmitted ethereal paintings is pure magic. I love the fact that the actual material aspect is so minimal.” says Sabeck. 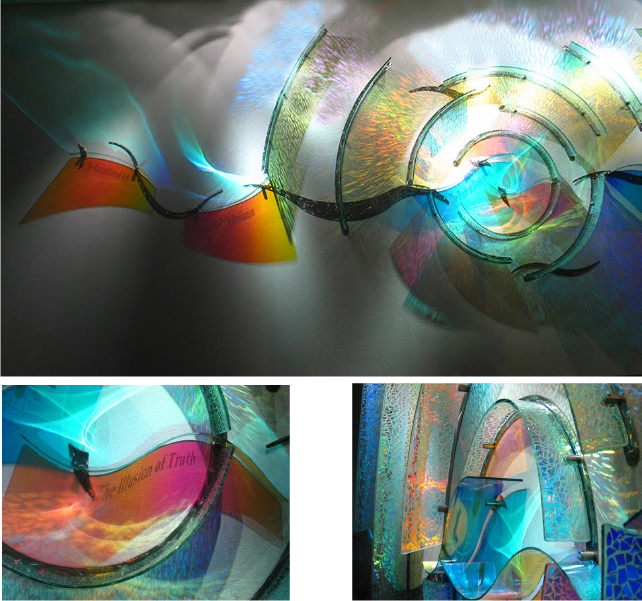 “The Source,” featured in Sabeck’s solo exhibition “Luminous” at the Oceanside Museum of Art

After decades of creating work for corporate facilities and running a successful Sedona art gallery featuring an international roster of glass artists, Sabeck relocated to San Diego. She had a large kiln built so she could expand her artistry in new directions.  “One of my first large-scale bent glass, dichroic mosaic works was created for the San Diego International Airport. This was also the first installation where I incorporated words, haiku poems about nature, into the work.  My intention was to calm busy travelers and take them out of their stressful situation.” 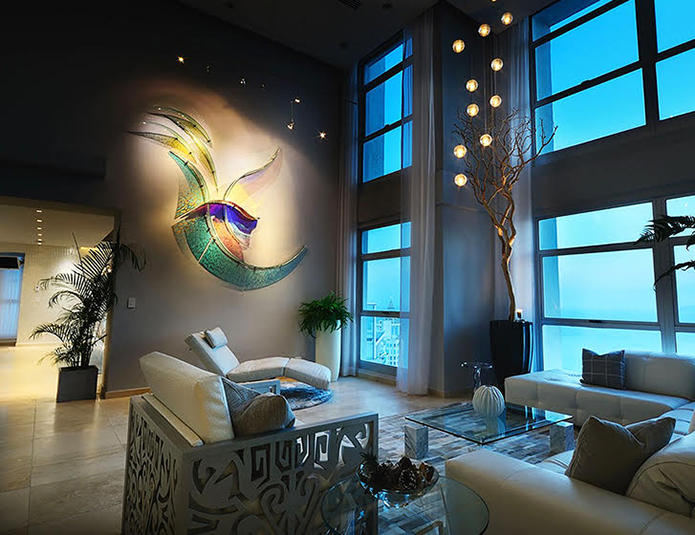 Since then Sabeck has continued to refine and experiment with the reflective and illusory capabilities of glass and light to create arresting compositions that might remind the viewer of fantastical jewels, bioluminescent sea creatures or even the paintings of pioneering abstractionists like Kandinsky. “Cataleya” and “The Source’ are examples of this body of work which is both rich and strange, calming and familiar. 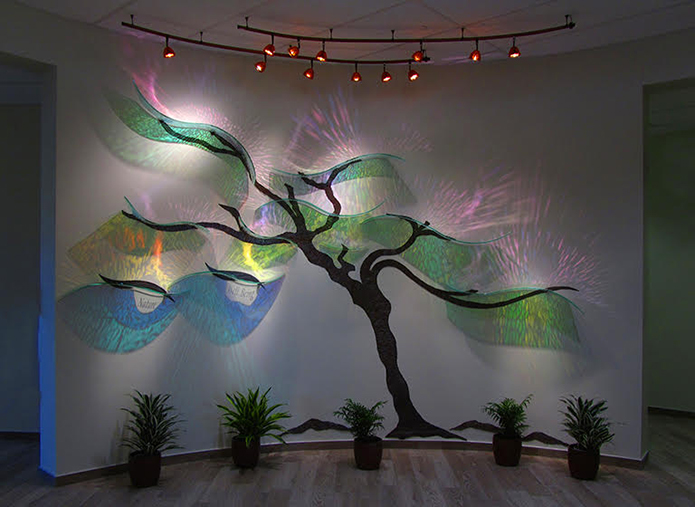 Sabeck is often commissioned to create installations for health care facilities. Weaving together local history, native fauna and even the color palettes of Greene and Greene architecture, Sabeck created the large-scale wall piece “Nature of Well Being” for a medical office. “In stressful situations, people need to be able to focus themselves and find something to bring a sense of calm. I wanted to bring the mystical and comforting quality we find in nature into this environment.”

Like figures performing an acrobatic act in slow-motion or the elements of calligraphy coming together to make an ideogram, Jeffery Laudenslager’s kinetic sculptures remind us that elegance can be based on boldness, dexterity and even humor. Drawing on a wide range of influences from poetry to physics, Laudenslager discovered his passion for arranging forms and experimenting with materials as a child when he played with the objects, tools and whatever he found intriguing in the family barn.  This was the genesis of his life as a sculptor. 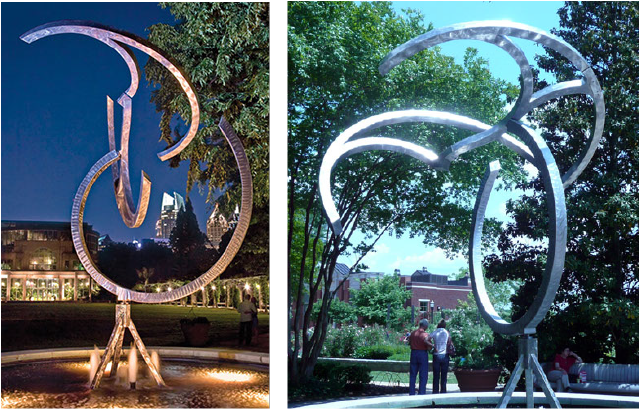 “Although in the beginning I focused a lot on the human figure, I became increasingly interested in the levitating appearance of discreet parts that made up the entire sculpture.  I wanted to see things float and move.  My last fifteen years of artistic production have been devoted to making my art practice as precise, visually satisfying, seductive, and, well, yes, beautiful as I can achieve.” Although his work is placed around the globe, many of his signature pieces can be found in Southern California, set dramatically against spectacular desert skies or coastal seascapes. Seeing Laudenslager’s sculptures in motion can induce an almost hypnotic state, especially in tandem with the natural rhythms of drifting clouds and ocean waves. 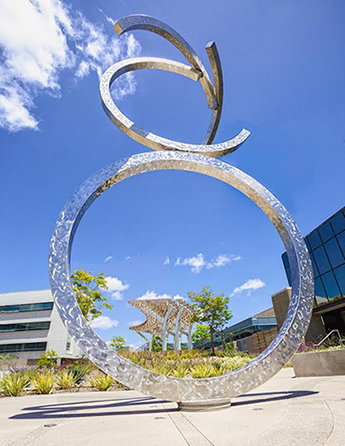 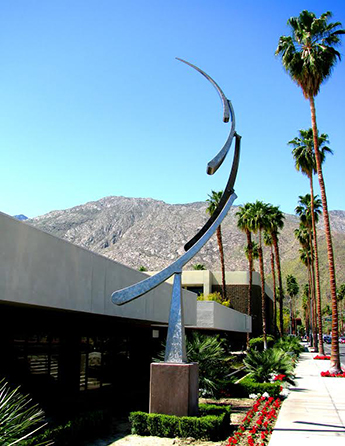 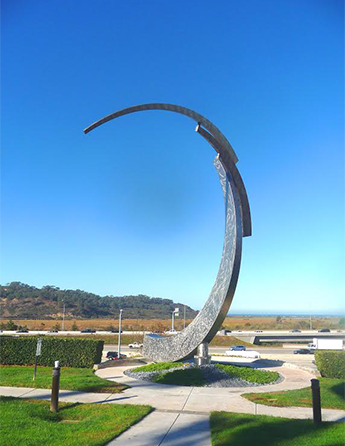 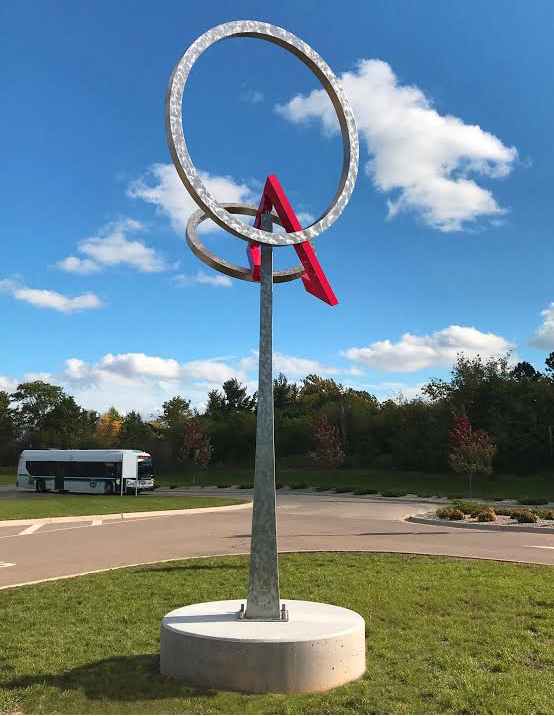 The scale of Laudenslager’s pieces never interferes with their gracefulness. The gravity-belying quality that Laudenslager finds so fascinating appears as one of his core principles. In the four works seen above, the sculptor has arranged silver arcs and circles and even a red triangle to create robust, yet delicate arrangements that make strong visual statements easily appreciated on an aesthetic as well as an emotional level. 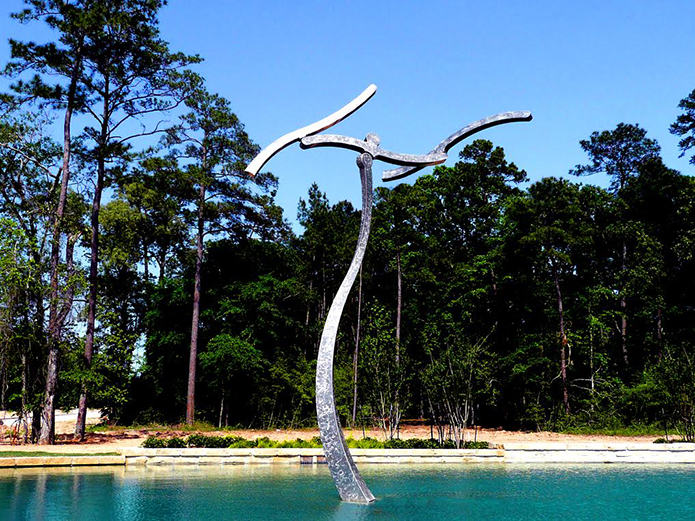 “I have a signature style that features slow, large gestures, like tai chi.” says Laudenslager. Moving elements are arranged into interconnected systems that create one composite shape.  Circles, squares, triangles, the peace symbol, the yin yang symbol.  As these sculptures move, those recognizable compositions form, disappear, and reform.  Endlessly.”

The Poetry of Collaboration 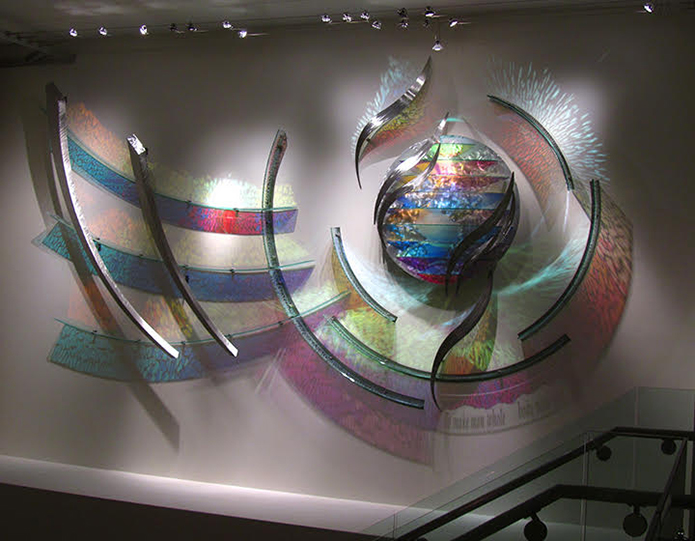 “To Make Man Whole,” Loma Linda Medical University, Loma Linda, CA. A collaboration between Sabeck and Laudenslager, showing the merging of their style.

As partners in life and sometimes commissioned works, Sabeck and Laudenslager share a certain aesthetic which allows them to combine forces and create public sculptures that amplify their individual talents and merge their strengths. “We have been successful in creating combinations that are not simply additive but are a multiplication of visual effects and emotional depth.” says Laudenslager. 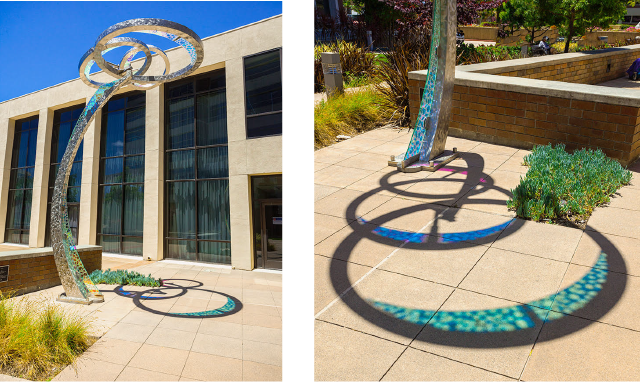 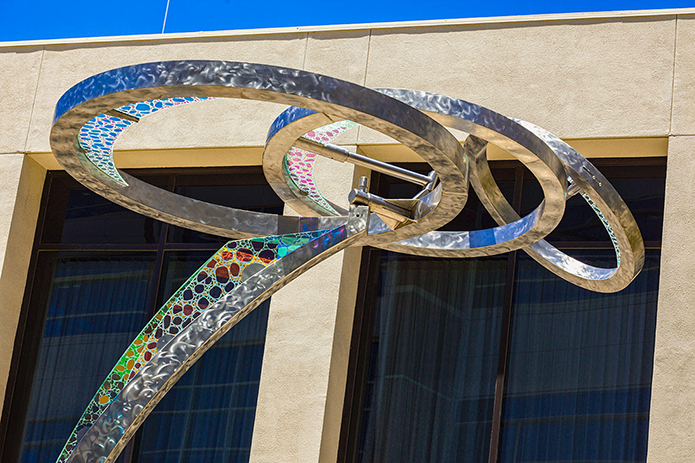 “Collaboration can be a challenge - but we have indeed found a way to use our specific knowledge of materials as well as our shared love of nature to create something really special.” Says Laudenslager. For “Halo” the artists created a lilting, tree-like figure with three highly-polished rings that dip and turn via natural currents of air. The fin-like delicacy of the mosaic glass elements add a jeweled quality to the arcs, and they literally illuminate the shadows cast by the sculpture. 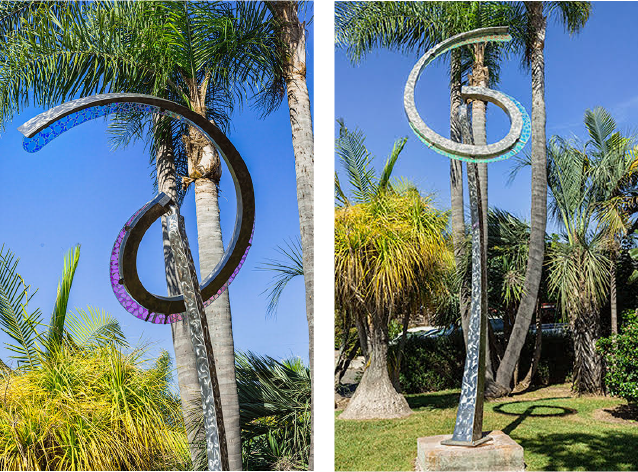 “The collaborative process isn’t always the same.” says Sabeck. “ Jeffery will bring me in sometimes to add light and color to a project.  At other times I’ll bring him in to work out the sculptural aspects of a piece. Then there are projects where we begin together at the start and these can be the most challenging - but ultimately so rewarding. This was the case with “Halo” and “Chromesthesia.” There is a great sense of satisfaction at the success of these finished pieces.”