Artist Stephen Canneto and his studio are well known for public sculptures that evoke hope and communal joy. These works employ a consistent vocabulary of figures and forms that emphasize individuals coming together to achieve a collective goal. Along with the qualities of exuberance and playfulness, there is also a sense of the empowering nature of collaboration in order to fulfill a higher goal. “The work that we create is truly a group effort. I tend to think of myself as a composer-conductor because there are so many talented and skilled people who work with us to make these sculptures a reality.” says Canneto. In the “ColorPlay” sculptures (three versions of which are found throughout the United States), the artist has created dancing groups of highly polished stainless steel figures reminiscent of both frolicking classical nymphs and the silhouette paintings of early modernists like Matisse. The “colors” in “ColorPlay” are the intricately arranged discs of shimmering dichroic and stained glass making up a perfect sphere held aloft by the figures.

This idea of wholeness made out of many smaller versions of itself is taken a step further in “Fitting the Pieces”. Here another group of figures have gathered, but are in the process of completing the act of collaborative problem-solving. This time the sphere has become something more akin to a map- although it shares in the qualities of other objects allusive to discovery such as a telescope lens or a brightly colored tangram-puzzle. The metaphors of investigation, science, and community involvement are perfectly suited for this work created for a forensic service center.

Over a career spanning many decades, Canneto has developed a recognizable visual vocabulary that reflects his deeply held beliefs about public art. “Although works of public art need to engage visitors with beauty and dynamism, I also believe they must carry deeper meanings reflecting the stories of a place, and the different groups of people that have left their mark on the landscape.” In this sense Canneto’s works are not only calls to the higher possibilities of greater community but also operate as encapsulations of cultural memory.

In 2019, Canneto and his wife the designer and therapist Judith Spater Canneto, collaborated on “Poesis”, a space for meditation and meeting at Crescent Crossings Wholeness of Life Center.  The elegant stained glass windows designed by Spater Canneto are in her words “…inspired by the Energy of Creation. The colors represent visible light’s full spectrum. The spherical shapes within the window designs reference the spheres of cosmos, the infinite, wholeness.” “Poesis” takes the colorful aspects of the floating spheres found in Canneto Studio’s figurative works and elevates them to a metaphysical level.

Inside the space which acts as both chapel and secular meeting hall, the bold shapes found in the main windows create broad beams of color across the walls and floor. One may be reminded of the orbits of planets, cosmic cycles, and the elliptical nature of galaxies and solar systems. Within the side windows elongated curves intersect and intercut reminiscent of how light falls through the branches of trees or illuminates underwater plants as it is filtered by water currents. Although obviously connected to poetry, the word Poesis goes further back to an antecedent that originally meant to compose in the sense of piling, heaping up or adding physical elements together.  This is certainly true here where the use of stained glass literally causes a slow-motion build-up of bold prismatic effects made through the ephemeral and changing patterns of daylight.

A careful review of the works created over Canneto’s long career reveal a logical evolution out of the figurative, abstract and light-filled works that are his hallmarks. The dancing figures aspiring upward, collectively raising elements of color lead to the opening out of greater, looser forms that echo the dance and become color itself. “Jubilation” and “Currents” are two recent examples of this evolution of forms. Both works are monumental, brightly colored compositions whose dichroic components elevate the stain-glass effects of “Poesis”, quite literally, into mid-air. The analogy to musical composition is also clearly evident in that both pieces not only resemble what chromatic sounds might look like if visualized, there is also a connection to the shapes of musical notes and notation.

When asked about his personal philosophy Canneto replies that he draws on several traditions Umbuntu, Buddhist, and Jewish, all of which reflect three core principles: “We are responsible for each others’ well being. We are deeply connected to each other. We are here to make the physical, spiritual, and metaphysical worlds a better place.” 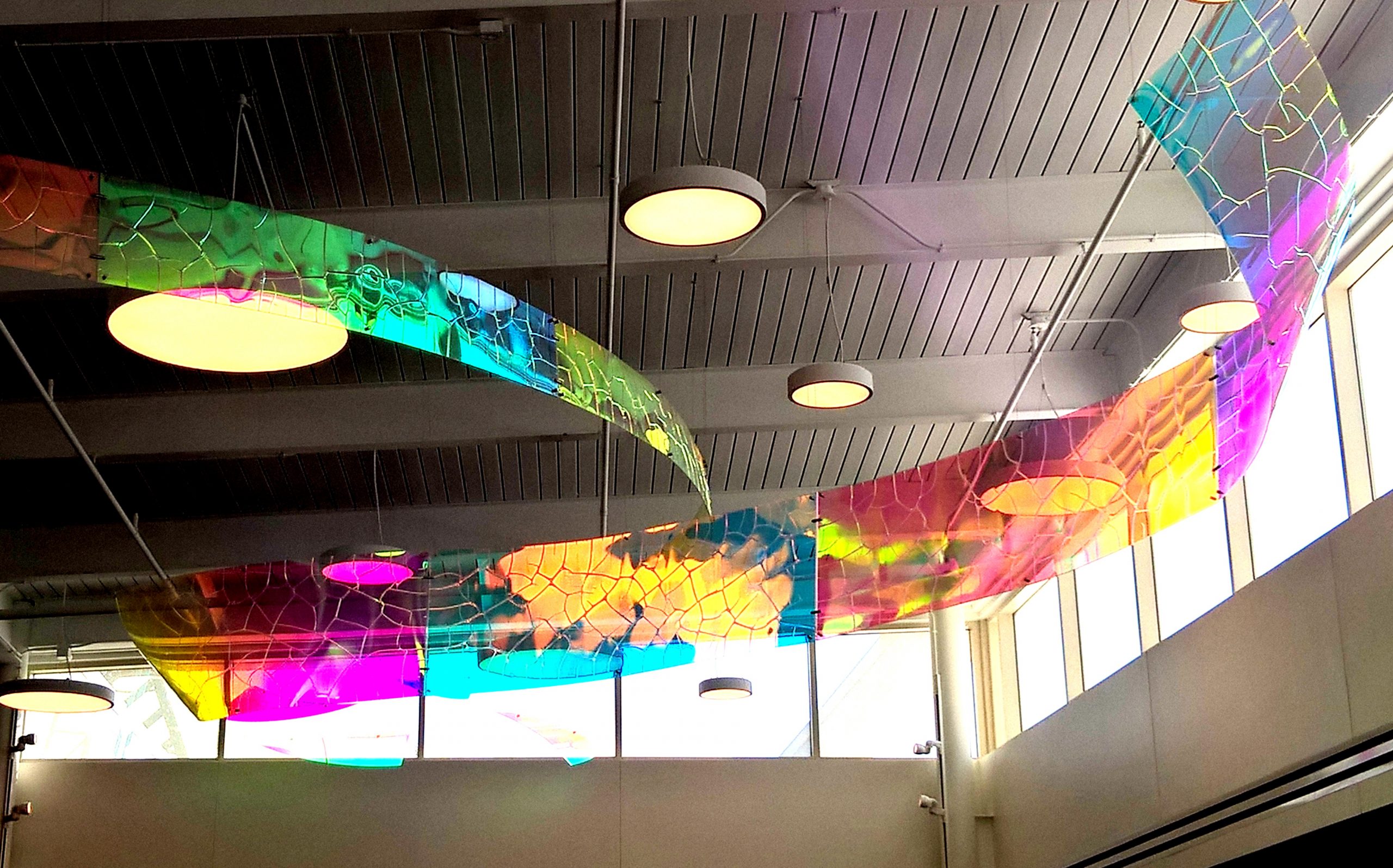